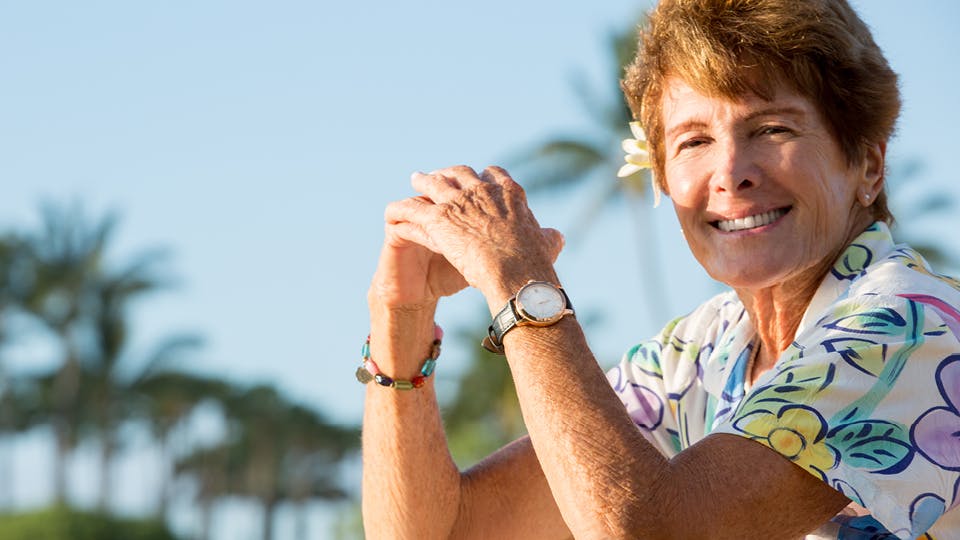 Emily T Gail might not have a Detroit address anymore, but she’s arguably more of a Detroiter than most. The creator of the famous 1970s movement "Say Nice Things About Detroit," — and the inspiration for our newest watch — now lives more than 4,000 miles away in Kailua-Kona Hawaii. Distance has not stopped her Motor City spirit. “If you’ve got Detroit in your heart, it doesn't matter where you live, work, or play. To me, that makes you a Detroiter,” she says.

If you’re ever lucky enough to hear one of Emily's stories firsthand about growing up during the 1960s and 70s when Detroit was labeled a crime-ridden city, then you’ll understand her sincerity and devotion to her hometown. Read more about her story below to learn why her word-of-mouth movement of action, "Say Nice Things About Detroit" has lasted more than three decades.

Shinola's newest watch, The Gail, is a tribute to Emily's cause and brings awareness to how something as simple as the saying, "Say Nice Things About Detroit," can help change the way people perceive our city forever. The Gail is a celebration of the city and a nod to the people who continue to make it great. 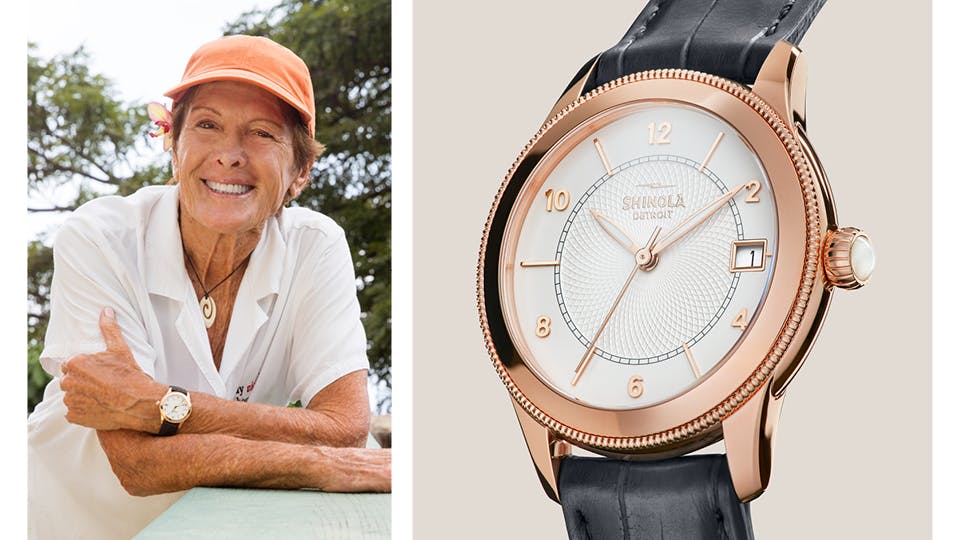 Emily T Gail wears the Shinola watch, The Gail, named after her.

Growing up in Grosse Ile, an island community located in the Detroit River, Emily began helping her father with his office supply store in the city’s Penobscot Building when she was just eight years old.

“My father was a die-hard Detroiter,” she says. “Detroit was inherent in our upbringing. It was a part of our life.”

After graduating from Grosse Ile High School in 1964, she left home for the University of North Carolina with the goal of eventually playing in the LPGA. Although she didn't end up finishing college, she went on to work at a golf course in Colorado.

It was around 1970 that Emily moved back home to Michigan and went back to working for her dad in his office supply store. When a tiny 9-by-12 storefront near her father’s shop came onto the market for only $160 per month, she quickly signed the lease and opened her first shop. She named it, aptly, 'Emily's'.

That one storefront eventually evolved into a total of three, all in Detroit: Emily’s Camera and Gift Shop, which sold and developed film along with small gifts like stickers and stuffed animals, Emily’s Too, a 500-square-foot gift shop, and Emily’s Across the Street, which along with being an ice cream parlor, also touted jewelry and clothing.

“I was feeling empowered by all I had learned from the time I was eight years old, working for my father,” Emily says. “I wanted my shops to help people understand the beauty of the city I saw — at the time, it was common to see downtown office workers park their cars and walk into office buildings with their heads down, without ever experiencing the beauty of downtown.” 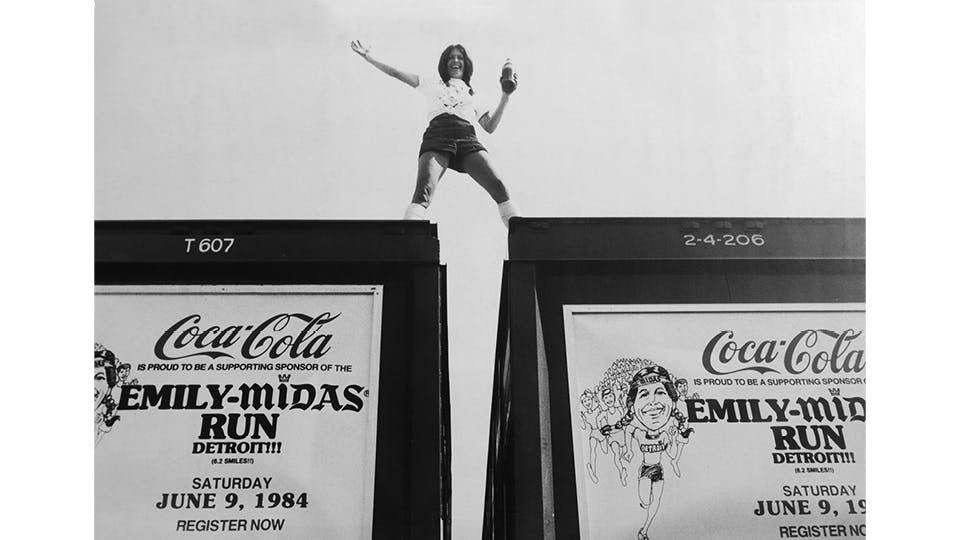 Emily was well-known for her braids and enthusiasm for the runs she hosted in Detroit. Signs were put onto Coca Cola Trucks (above) and city busses.

On a trip to Fort Lauderdale, FL with her then partner, Herb Squires, the couple kept running into people they knew from Michigan who would question why they would ever go back to the Motor City. “They’d say to us, 'Isn’t it nice to be out of Detroit?'”

Without hesitation, they spent the rest of their trip hiring a plane to fly a banner that read, “Hi, Detroiters. Enjoy Florida. Say Nice Things About Detroit. Emily.”

That stunt garnered lots of media attention and led to the wave of Emily's famous motto. Energized by the positive reception, Emily launched the first of her legendary runs throughout Detroit. An avid runner herself, it was another way for her to spread the word while doing something she was passionate about. 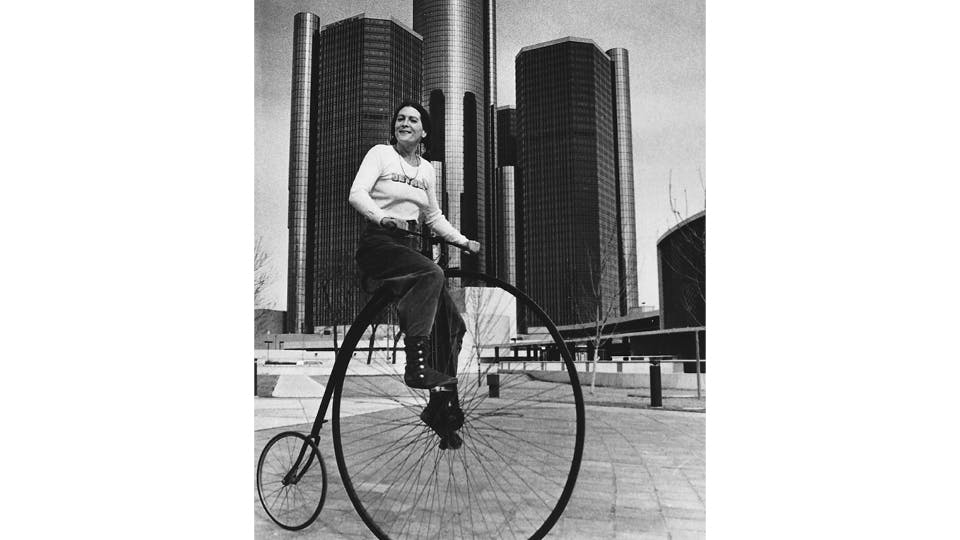 Emily cycling on a penny farthing in front of the towers of the Renessaince Center when they opened in 1977.

“We thought one of the best ways to get people out of the buildings or into the city would be to create a footrace in the streets of Detroit,” she says.

“There had never been one. People who would do runs were always out on Belle Isle, but never downtown. We started putting the word out, and once when I got back to the store, the police chief had a car waiting for me. In a playful way, he said, ‘Hey, you need to come over and talk to Chief — you can't just put a run on in the streets of Detroit, you need to do that on Belle Isle,’ but my whole idea was that we want people to run through the city streets — we want to showcase the city.” 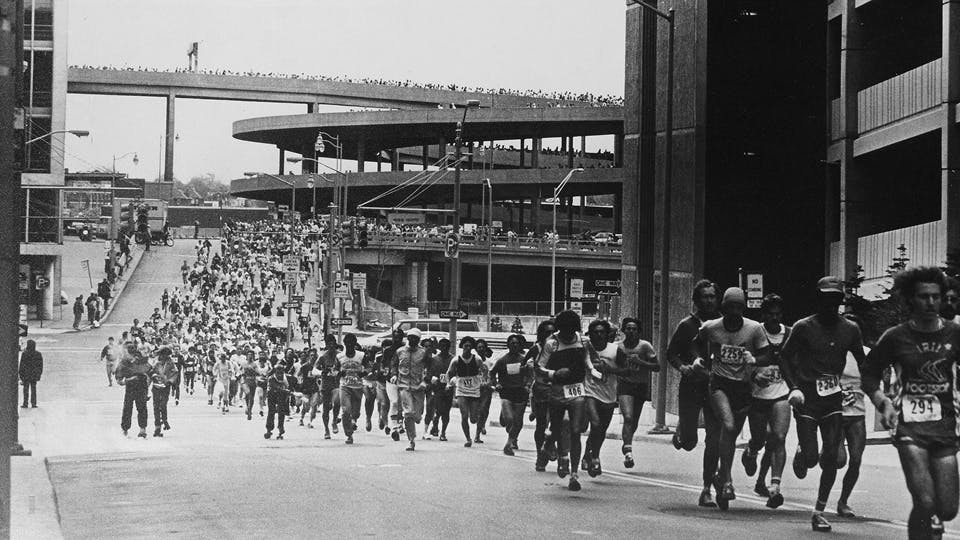 In 1983, all runners started from the top of the parking deck of Cobo Hall and finished with a lap inside Tiger Stadium. "We finished with a party at Trumbull and Michigan area with Domino's Pizza, Stroh's beer, lots of music and dancing outside the stadium."

Showcase the city, she and Herb did.

“I rode my bike everywhere in Detroit at the time. I'd even put on a couple bike days. I really believed the streets were the greatest recreational asset we had because when you ran and rode a bike around Detroit, you saw people playing in the streets all the time, because that was their playground. That's how neighborhoods played.” 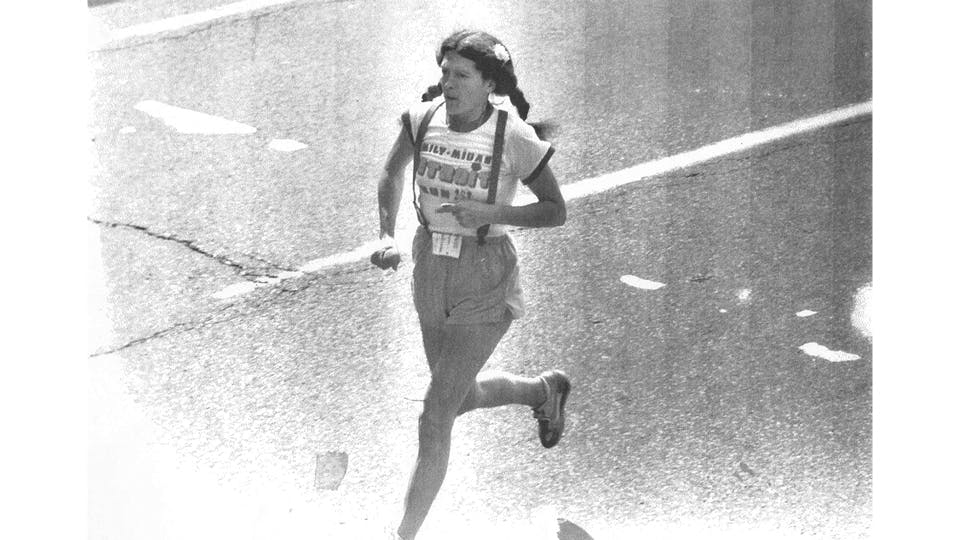 From 1975 until the late 80s, The Emily Detroit Run evolved from a less than a 100 participants, to thousands.

"We rarely used the term 'Fun Run' because it was inherent in the Emily Detroit Runs. We attracted recreational runners, first time runner and walkers, handicapped and differently abled athletes before most runs allowed them, people who had never been in a walk/run before, and a big part of the crowd ran in the run because they loved dancing in the streets as much as I did, and singing to the tunes for hours — everyone had fun at the party afterwards," Emily says.

Putting on such a big event became a full-time job for Emily and she would get sponsors to help her host such a large event. Every runner received a t-shirt that said "Detroit" on it, with a heart. Eventually as crowds began to participate, everyone wanted a t-shirt. "Say Nice Things About Detroit" began appearing everywhere from bumper stickers and pins to apparel.

“In the '70s and '80s, it really wasn't fashionable to be a social entrepreneur. I think we were ahead of our time. We were individuals reaching into our own pocket to do some good. And it was very suspect by people.” 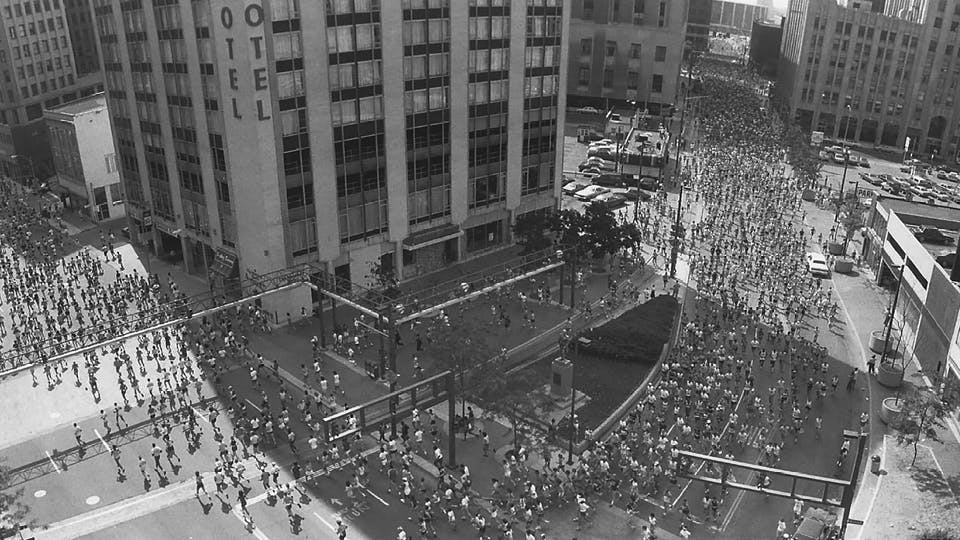 An aerial shot of the 1983 Emily Detroit Run.

Emily spent nearly two decades rallying Detroit to get into the streets, and continuing the "Say the Nice Things About Detroit" movement. Eventually, her experience in planning large run races caught the eye of Ironman, a race and competition that would continue to take the country by storm. Although the move was a difficult decision, Emily felt her passion for Detroit didn't need to stop just because she moved to a new city.

“We were the first couple to ever do the Ironman. And I was one of the first females to do it, back in 1981 or '82. People from the Ironman would come to the Emily Detroit Run to see how we did things. How did we get the streets closed? What did we do? In those days, that was new for everybody putting on events. Most of us went broke,” she says.

In the 80s, Emily's slogan turned into something bigger than she could have ever imagined. “It was born out of a really authentic cause. It was organic. We needed to tell people to come on downtown and see all the nice things that are going on,” she explains. “I think it speaks for itself, the way it has stayed in the hearts of people.” 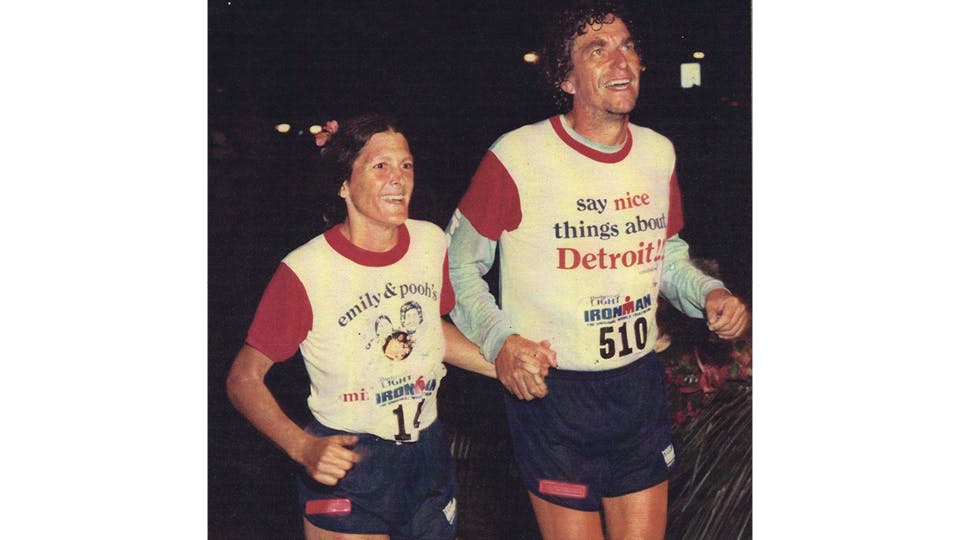 In 1981, Emily T Gail and Herb Squires were the first couple to complete the race together. "We wore our Detroit message everywhere and were really learning the ripple effect." (pictured above)

These days, Emily still loves island life in Hawaii, but makes sure to visit Detroit at least a few times a year. She also hosts a regular podcast about her connection to Detroit and stays up on the city’s daily news.

Her motto that marks a movement, "Say Nice Things About Detroit", can still be found on bumper stickers and t-shirts at places like the Detroit Historical Museum, but it’s more than just a slogan. Emily refers to her connections in the city as 'movement caretakers'. Police officers, police chiefs, journalists and city council members all keep Emily's call to action going.

"If you learn to love to wander around and scope the little pockets of places, not just park your car and go into the building — you learn to do that wherever you go. People that stay in the suburbs and don't go into the city are the same ones who come out to Hawaii and stay in the resorts and don't go beyond, but when you get them to explore they understand this place so much more. It's an attitude, really, about life. Exploring a little more. Everyone's got to get out of a comfort zone."

Emily T Gail would love to hear you "Say Nice Things About Detroit". Contact her, here. 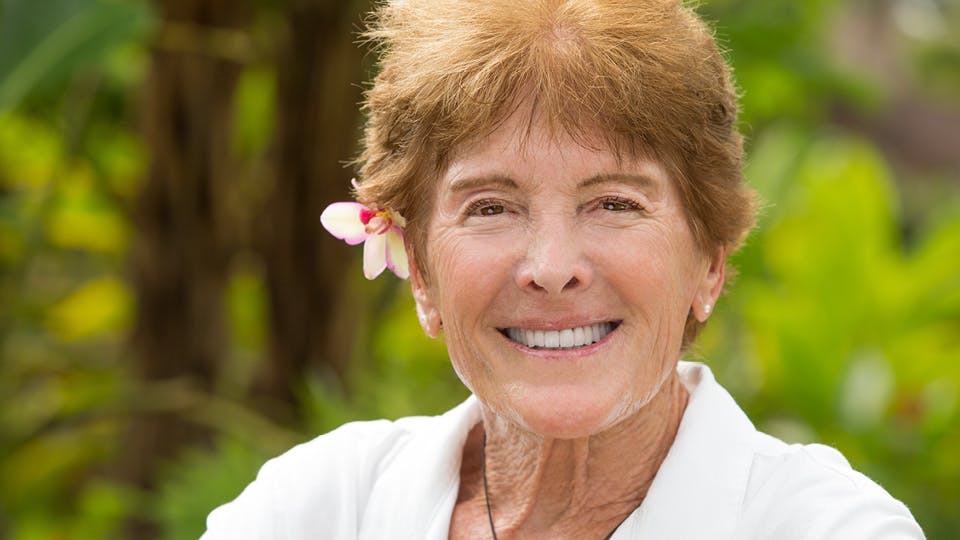 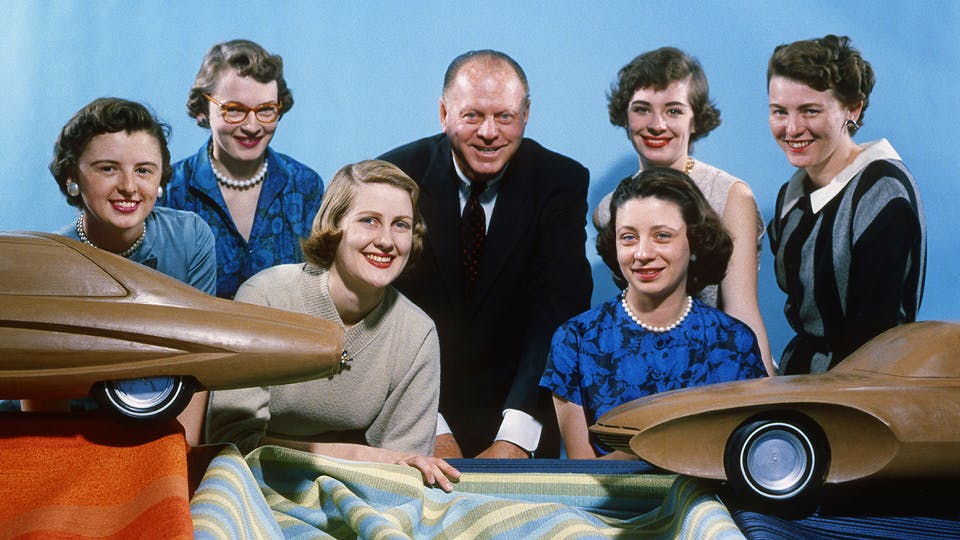