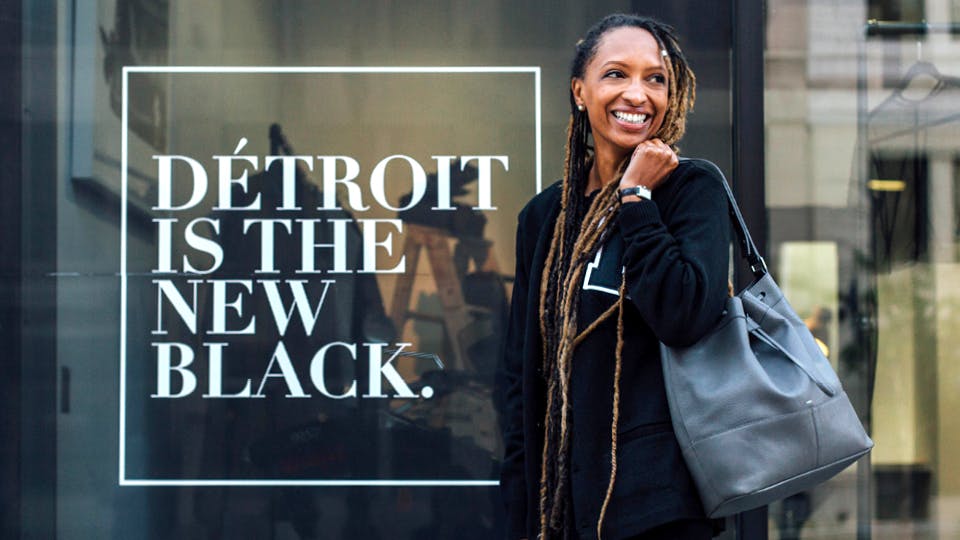 Meet Roslyn Karamoko, founder of the brand Détroit is the New Black. Just this summer, she opened her first brick-and-mortar store in the heart of downtown Detroit. After moving here from Seattle in 2013, she started the brand as a platform for design and inspiration in the city with pop-up shops around town. Today, her new store showcases more than just Détroit is the New Black merchandise, it also features other local brands alongside large scale art installations and designer clothing by Detroit-native Tracy Reese.

Roslyn is pictured with her Shinola Convertible Drawstring bag cut and sewn from American leather. Learn more about her story below.

Roslyn's store is creating a space that not only sells beautiful products, but also supports the local arts community. She hosts events like poetry slam nights and regularly rotates the art featured in the shop. "I like to think of the store more as a locally curated retail co-op," Roslyn says. "A lot of large and even upcoming local brands are interested in Detroit, but they don’t know if they want to open a full retail location, so it’s a place where they can represent their brand — that’s what this space is."

With a background in fashion merchandising and experience as a buyer for Saks Fifth Avenue, Roslyn has always had a good eye for recognizing trends. When she moved to Detroit three years ago, it was the city's creative community and revitalization movement that pushed her to start her own business.

Détroit is the New Black is a brand many Detroiters instantly recognize, but many people might not know the real story behind the catchy phrase. It's more than a play on words that touches on the city's French history or the popular TV show Orange is the New Black — Roslyn wanted to create a brand that spoke to everyone and raised awareness to the city's comeback.

"It's this pop culture phrase that really means the 'new hip', and that’s certainly what Detroit was becoming in 2013, but there was so much that needed to be flushed out in order for the city to move forward in a more unified and inclusive way," Roslyn says. 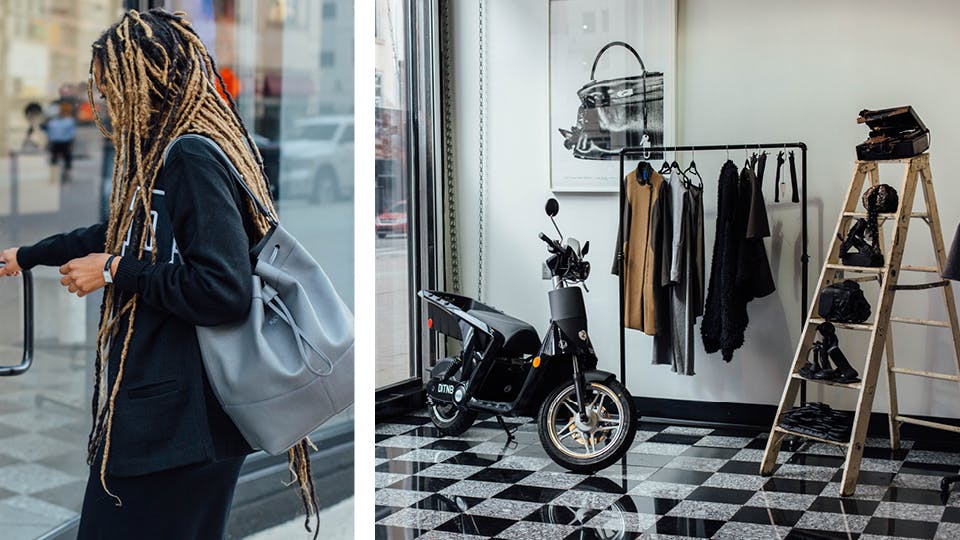 Every morning, Roslyn drives her scooter to work and unlocks her store (1426 Woodward Ave, Detroit) for the day. Shinola's Convertible Drawstring bag in gunmetal is her everyday bag, designed to brave the elements like wind, and still stay premium and supple.

Settled in now, Roslyn has no intentions of leaving Detroit anytime soon. Her brand has expanded more than she could've ever expected and she's regularly sought after for guidance from other brands making their way downtown.

"The point is to retain the character and identity of the city. There are racial undertones in the city that are affecting the way the city moves forward, and I wanted to create a brand that spoke to everybody and wasn’t antagonistic — it was about including everybody and creating a beacon of light in the city that everyone could be a part of. It's culture, it's fashion, it's art, it's whatever we love." 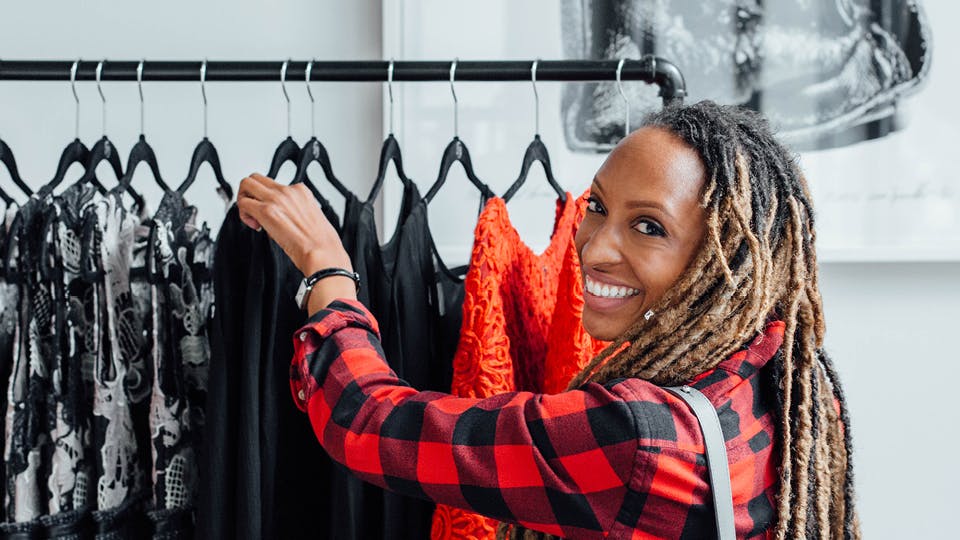 This female entrepreneur knows Detroit style better than anyone we know, so we were curious to hear more about how Roslyn styles her Shinola bag. Out of all Shinola's women's leather options, Roslyn uses the Convertible Drawstring bag in gunmetal for its versatility.

"I chose the Convertible Drawstring bag because I can chuck my laptop in it and my wallet, water...all of the million items I carry with me every day. Also, it's beautiful, functional and perfectly crafted," she says. "It’s also kind of slouchy and bohemian, which is more my style compared to a really structured bag." 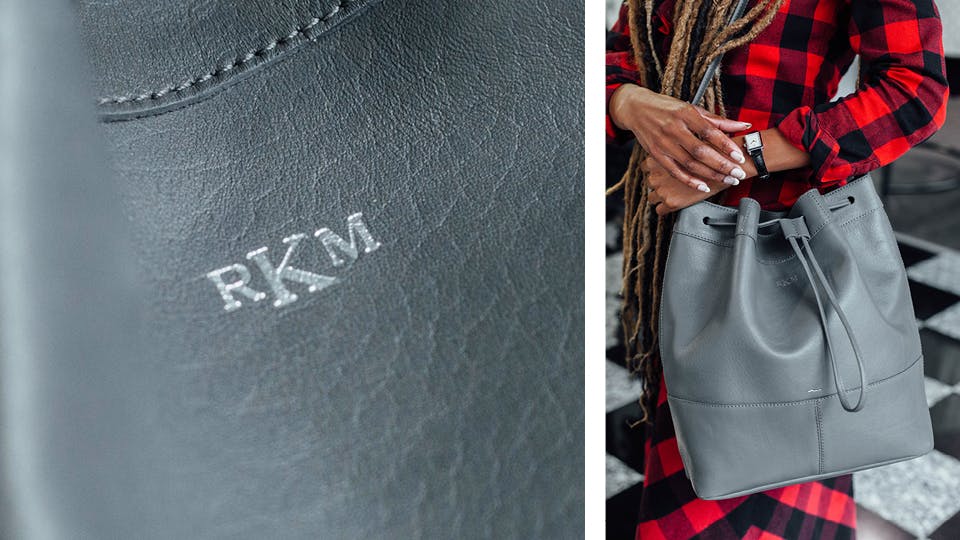 Roslyn personalized her handbag by getting her initials monogrammed on it at our flagship store. "Getting my initials on the bag added that little extra touch I was looking for," she says.

A limited selection of leather goods are available for monogramming online, or stop into any of our stores and ask a sales associate to assist you with monogramming your new leather purchase.

She also wears the Shirley Fromer watch from our Gomelsky collection with her Convertible Drawstring bag in gunmetal. 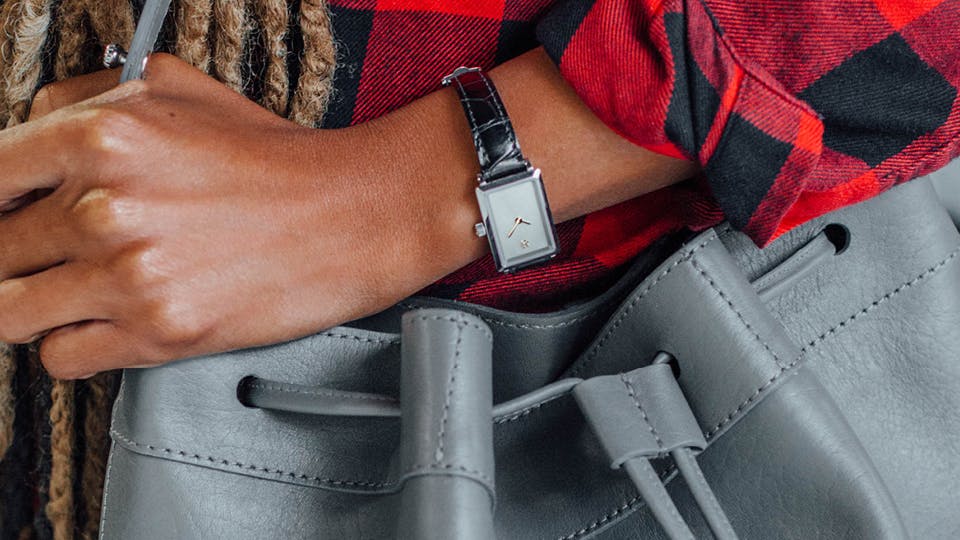 "The easy drawstring closure makes it ideal for any woman on the go," Roslyn says. "I really like this gray color too, I think its really smart and on-trend. It's a good alternative to black, which is my go-to," Roslyn says.

Roslyn wears a Shirley Fromer watch from the Gomelsky collection with the Convertible Drawstring bag. 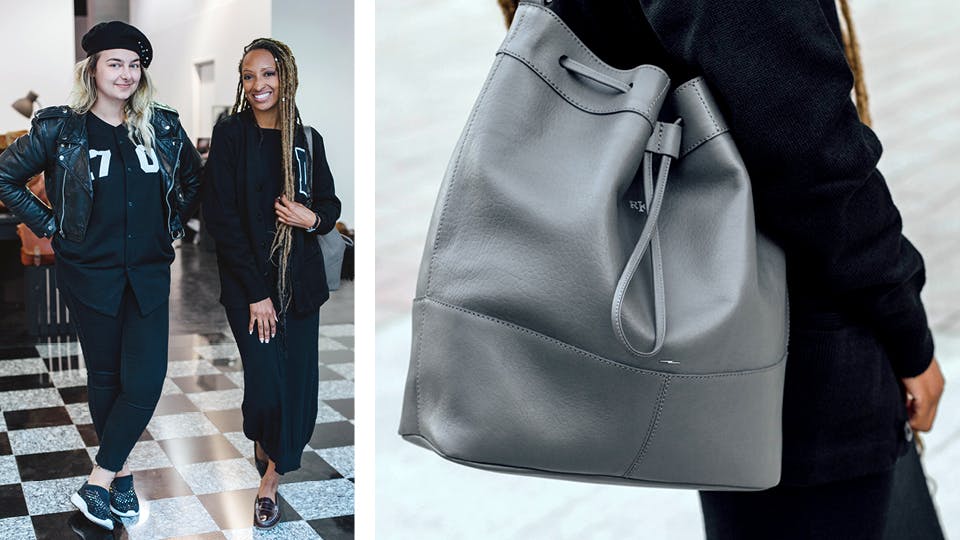 Roslyn with her team member Alex Bricolas inside her store. 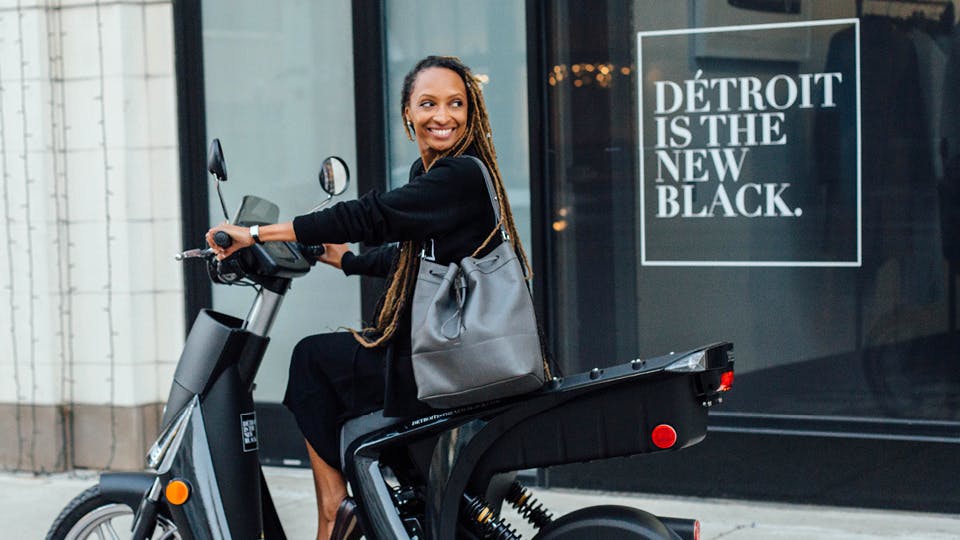 Leni Sinclair: From Outsider to Insider

Leni Sinclair: From Outsider to Insider 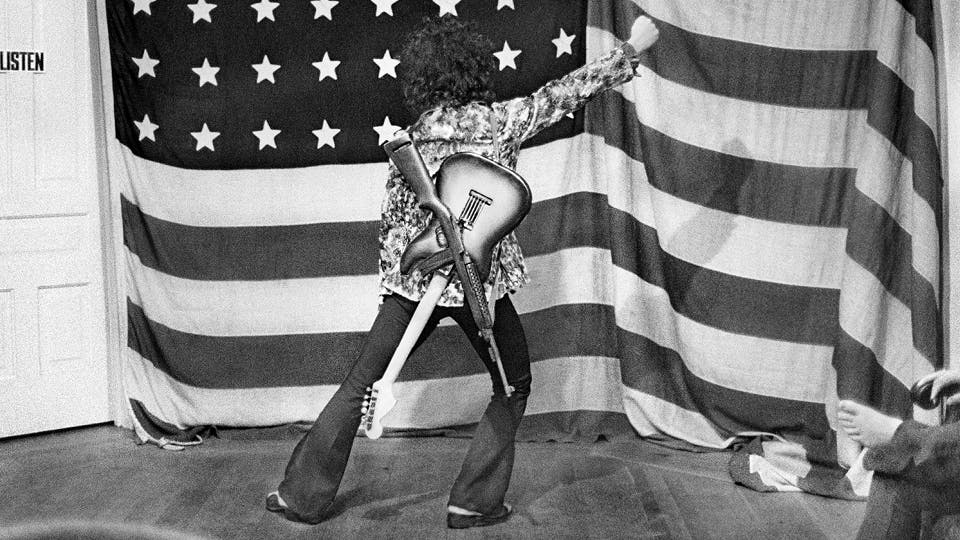