Our newest mural is up at our Wynwood, Miami store. Painted by Kelly Breez
Profiles
Stores
Places

Multidisciplinary artist Kelly Breez just finished our Miami store's new mural after three days of painting all by herself. Before she started this project, she flew to Detroit for the first time to get a behind the scenes look at Shinola. While here, she kept a film camera on hand to document her 24-hour Motor City adventure — watch the video of how it all came together then catch the photos that inspired the finished mural in the interview with her below.

Nestled within the Wynwood Art District, our Miami store gets a facelift with a new handpainted mural every few months — read about the first mural, here. 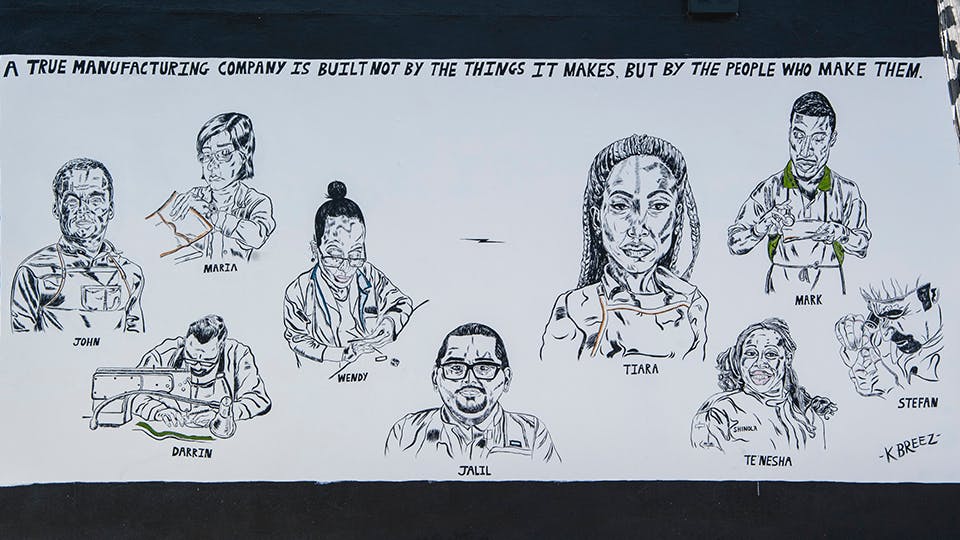 The newest mural on our Miami store.

What kind of art do you make and how would you describe the new Shinola mural you created?

When I moved to California from Miami I was doing a lot of 2D because I didn’t have the space to do any woodwork and stuff. When I was in Miami originally I was doing humongous found object sculptures, and much of that work was shown in my BFA show. I rode around in a U-Haul and collected humongous pieces of junk, and it was a very cool installation, but I was a drawing major so everybody at school was fighting me on it pretty hard. It was ironic that I started doing 2D stuff again when I moved to San Francisco because I didn’t have much space to work in.

There’s a couple of common threads in my work, which are very layout, design-oriented. When I did my recent 3D pieces, it ended up being very much about the structure of the installation. Most of my work incorporates some kind of humor, sarcasm, or pop culture references. I like to create things that are very visually striking right off the bat — that's really big for me because you can walk up to a piece of art and stand there for 20 minutes wondering, but I like things that capture your attention right away.

That's exactly what I was going for with the Shinola mural experience. Simple and clean, nothing super crazy, but striking and real enough to stop you in your tracks.

How did you find inspiration for the mural?

I used the new ad campaign as the main inspiration. I dug through the website and on my walk around the office this morning I noticed many of the images I had seen online actually hanging on the wall. I did a bunch of sleuthing before I came here to try to get to know the core of the brand. You can’t do any good work for somebody else if you’re not going to do a little digging first, and not into what they're going for in the first place. Since other people took many of the inspiration images I referenced, I rolled in with four rolls of film so I could harass everybody (laughs) and get my own shots of people. 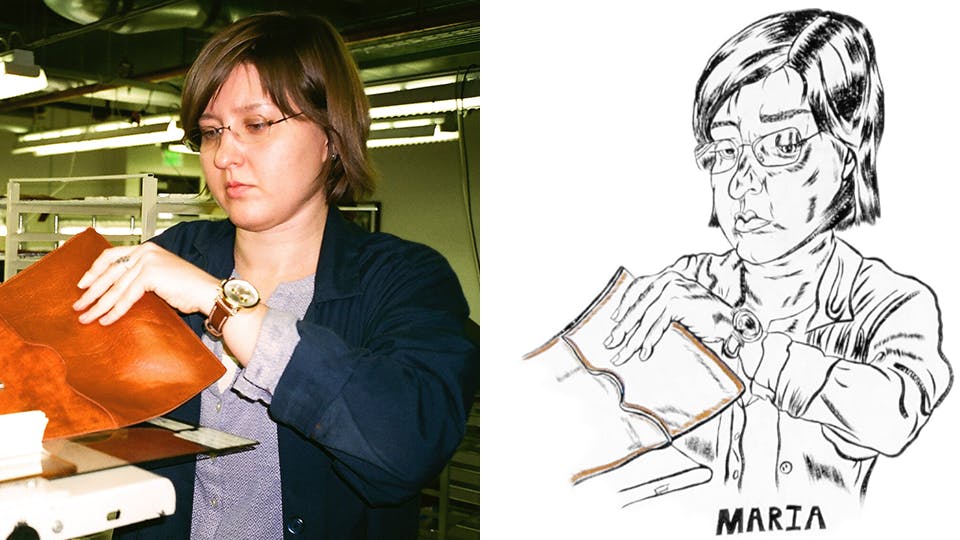 Kelly painted Maria's portrait after photographing her in the leather factory. 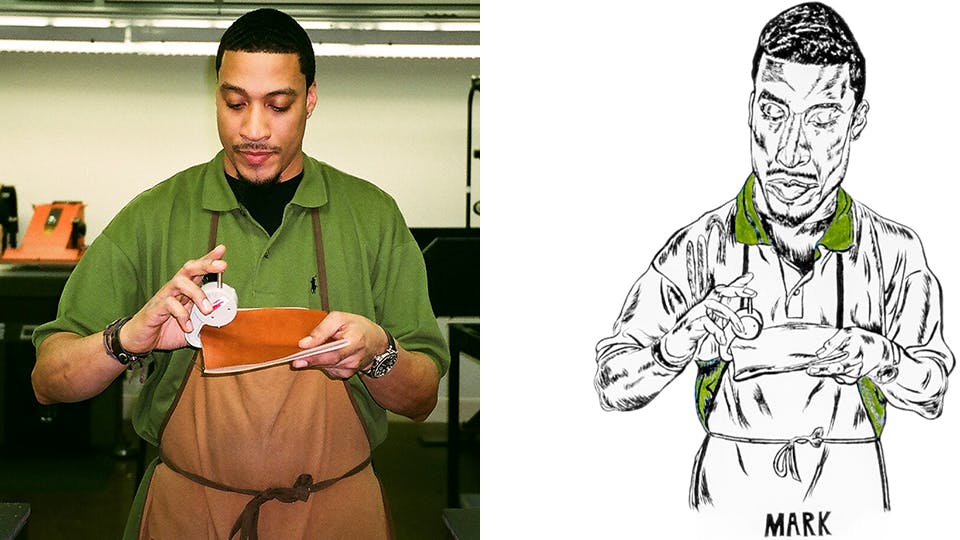 Kelly photographed Mark inside our leather factory and painted it into the final mural. 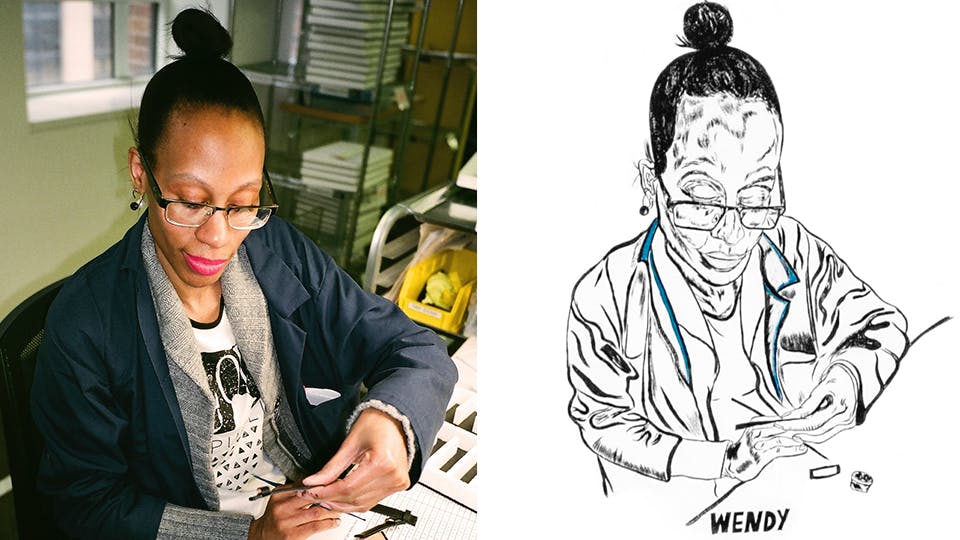 Kelly painted Wendy Blackwell's portrait after photographing her in the leather factory.

Why did you move back to Florida after living in San Francisco for eight years?

I spent a lot of time in Miami after graduating from the New World School of Arts in downtown Miami, but then I moved to San Francisco. I decided I was way too tropical of a person to stay there, so a year ago I moved back to Florida.

I guess I should mention that I recently became a straight up renovation lord. I just finished renovating this little cottage.

The reason I moved out of San Francisco is because I grew up sailing with my dad, and he sold our beloved boat that we sailed all over the place in and upgraded to a much larger one that needed a lot of work. I love doing stuff with my hands, so he called me and said, 'Want to come restore the boat?,' And I literally left two days later for Miami to help. We're still kind of working on it, but that also opened up this whole other thing in my own work. I've started to play with wood more.

What is your advice for other creatives?

I love co-creating. It's not always easy, but it's great once you find that sweet spot with the right kind of person or group of friends. For example, I just launched an overall company a few days ago with my friend Shaunessy.

Seriously, just go jump in the pool is my type of advice for others. I’m pretty cutthroat when it comes to pursuing creative projects, and I think others should take that as advice if they need it. I’ll just go do it, whatever that might be, and I’m never worried about it — I have no fear surrounding failure or what the outcome will be, which many other people do. Which is why when people are afraid to jump into some kind of creative endeavor, it’s just fear-based and fear isn’t real. You make it up. You have to get over your shit and go forth with what your gut tells you. 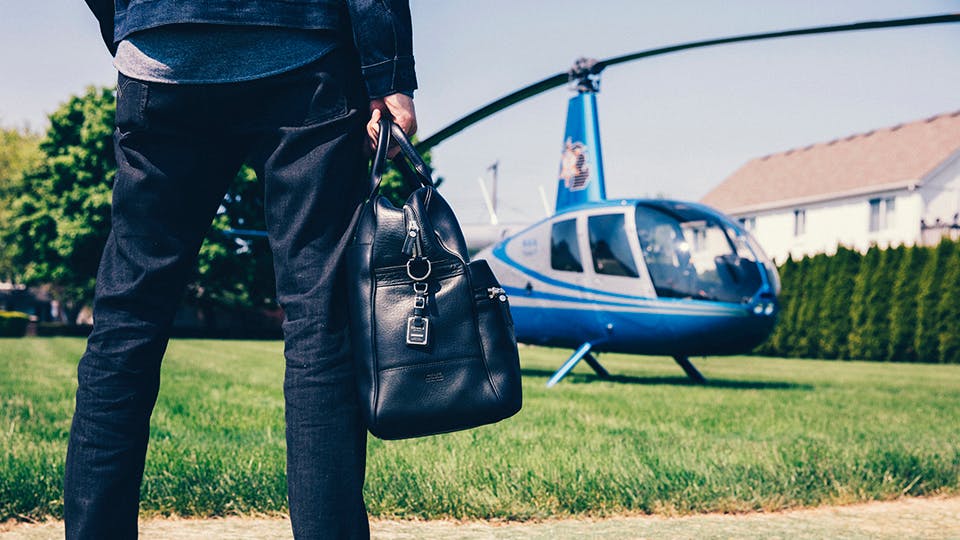