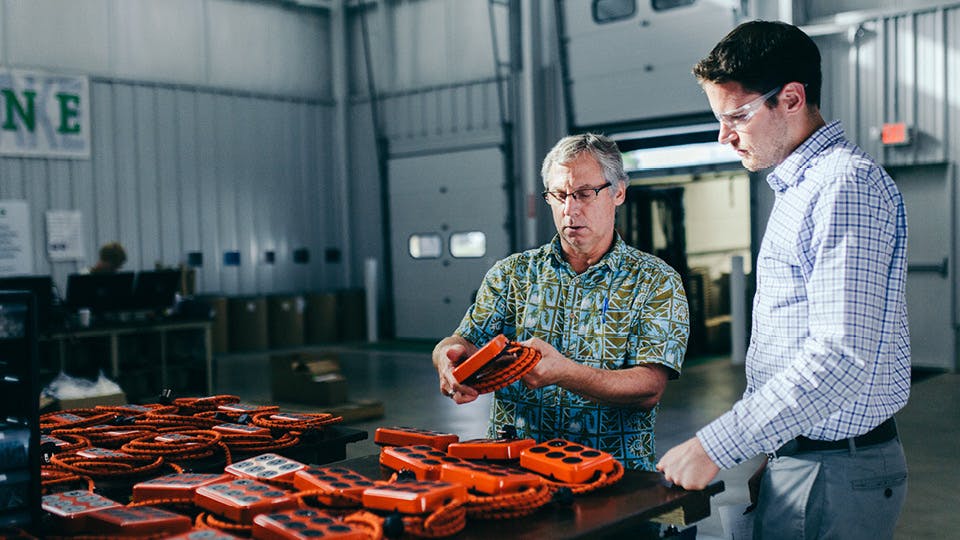 The partnership between Shinola and GE is monumental, not only for our Detroit factories but also for other small American manufacturers across the country. When we set out to make premium power cords, production was kept close to home by working with Western Michigan-based Byrne Electrical Specialists, Inc. Byrne shares the same goal as Shinola — to create well-made products that are built to last while creating world-class manufacturing jobs in the process.

"The importance of what these devices provide is the way they connect humanity," says Byrne managing director Dan Byrne. "We’ve seen a lot of growth and electrical accessories are a big part of our business — staying connected is a way of life.”

Dan's father, Norm, had a career in wire harness and warehouse manufacturing before starting Byrne. It was 1971, and Norm was working for an electrical assembly company when his mentor, and next door neighbor, helped him gain the courage to venture out on his own. He started his electrical assembly company, Byrne, in the basement of their family home in Ada, MI. His co-founder was his wife, Rosemary.

Western Michigan has a long history of furniture production, and the young Byrne created some of the first electrical accessories to power up office furniture. The company expanded quicker than they could have imagined, and after becoming a lead supplier for Ford Motor Company in 1975, they moved to the larger city of Grand Rapids.

In 1977, what had been a small electrical assemblies company, began developing power management solutions for office environments, and in 1979, the company established their Rockford, MI headquarters, where they make a wide range of technology products such as USB electrical ports and in-surface electrical units for desks. 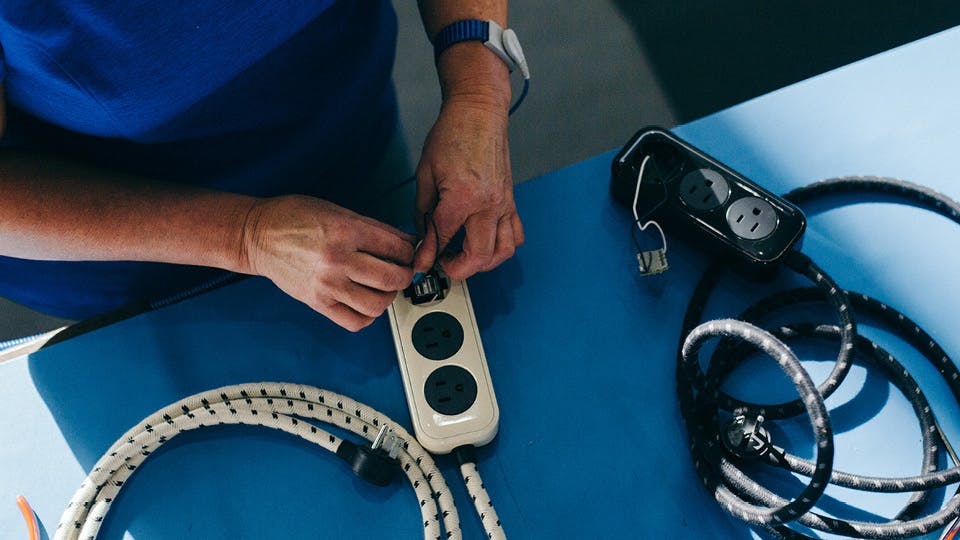 By 1985, Norm earned his first patent for the retractable power center. By 1992, sales had reached $10 million per year. Byrne continued to improve its development and design capabilities by expanding its molding facility and purchasing an on-site tool and die company for quicker turnaround. Dan had worked for his father throughout his life, and after graduating from college, he began working full-time for Byrne.

“Norm is an inventor; he’s the manufacturing guru. Growing up, I would go with my father every Saturday to work. Those are the memories we have of spending quality time together. We weren't out in the back yard throwing the baseball around; we were on the shop floor.”

Dan now manages the plant, and executes his dad’s greatest vision: creating American manufacturing jobs. His biggest passion is building strong, cohesive teams of people, and he's brought much of the organizational development to Byrne through the use of IT systems, team-building activities, and sales strategies. 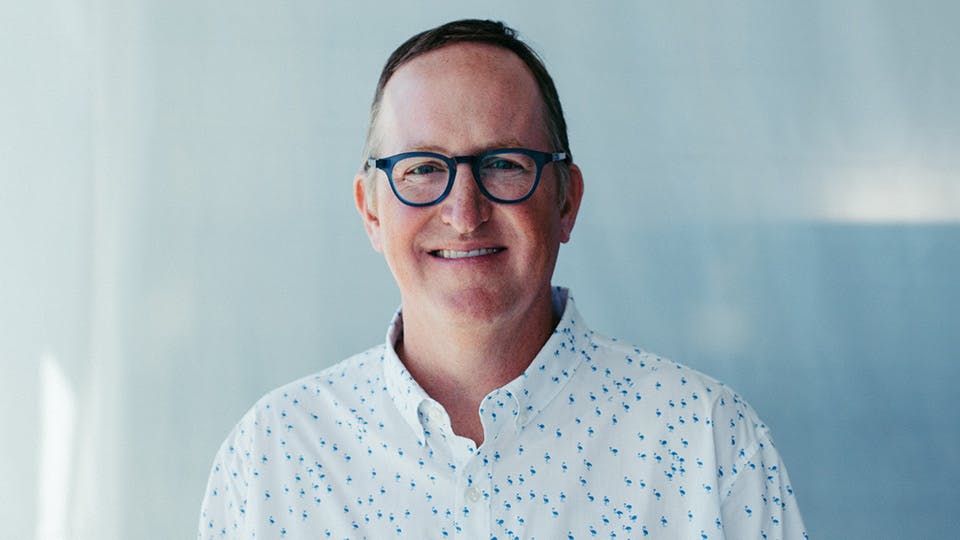 Byrne has expanded its facilities several times since opening its Rockford manufacturing plant. As an addition to the plant, they created an industrial park in Rockford and welcomed new businesses within its walls. They even opened a childcare facility for Byrne employees. This year the company will make more than $100 million in sales, and Rockford continues to boom with new homegrown businesses.

"My father chose Rockford with the thought, 'If they build it, they will come,’” says Dan. “Other manufacturing companies followed suit and set up shop here. My father's vision inspired people all around us."

The company's newest 15,000 sq. ft. manufacturing facility in Lakeview opened in September 2016. This is where Shinola + GE Power Supply Extension Cords are built. They opened the facility to expand manufacturing capabilities, but Dan says what distinguishes the facility is the advice they gained from their employees' before opening. 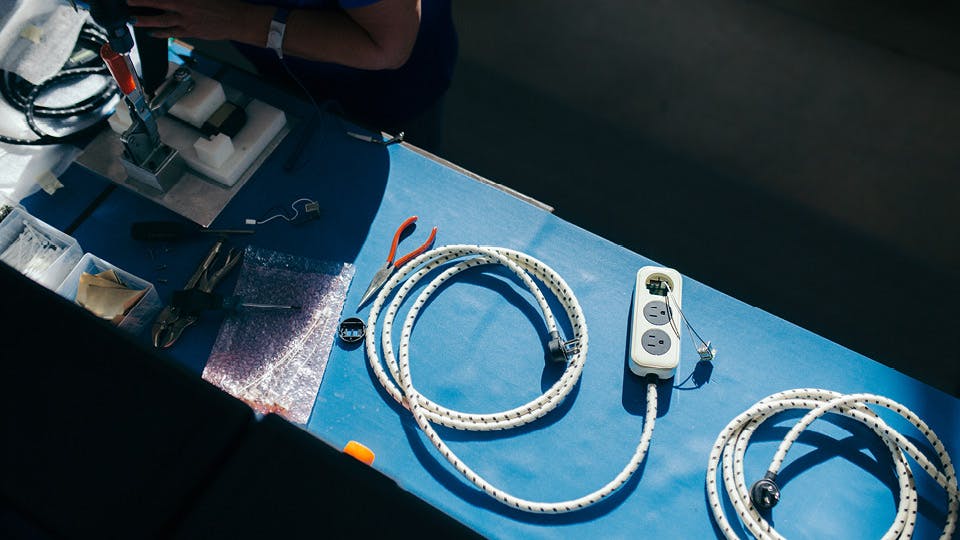 A glimpse of the Lakeview facility's assembly line where Shinola + GE Power Supply Ports are built.

"We drove around to see the different potential communities that we might bring jobs and support to," says Dan. "Lakeview used to have a wire harness manufacturing plant there. That closed in the late 80s, and so some of our employees came from Lakeview to Rockford because they had that expertise, but it's almost an hour's drive."

Now, the Lakeview employees have their commute time cut down, and new jobs are brought to this community. 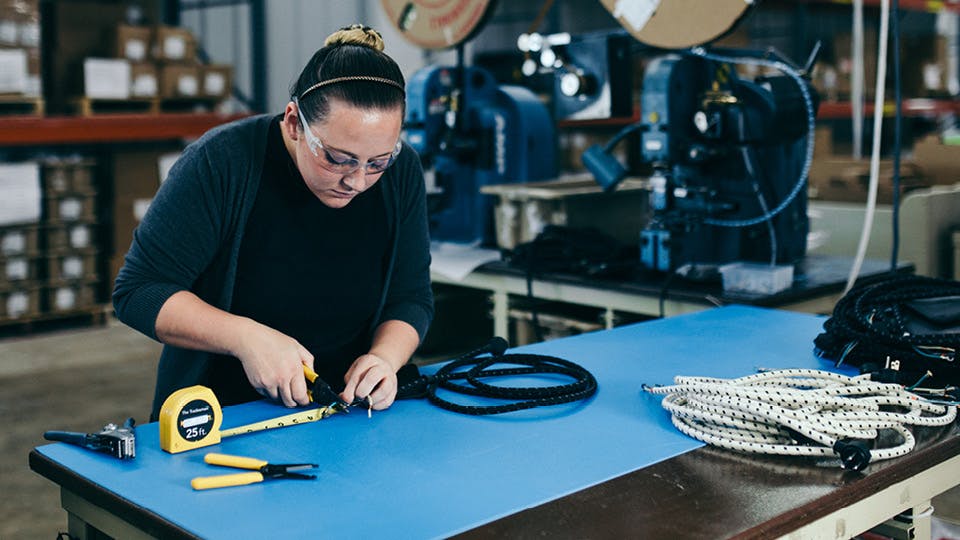 "As a steward to my father's legacy, I felt a responsibility to invest in our employees and open the Lakeview facility to help people who were already working for us. Instead of outsourcing, this was an opportunity to reinvigorate a community.” 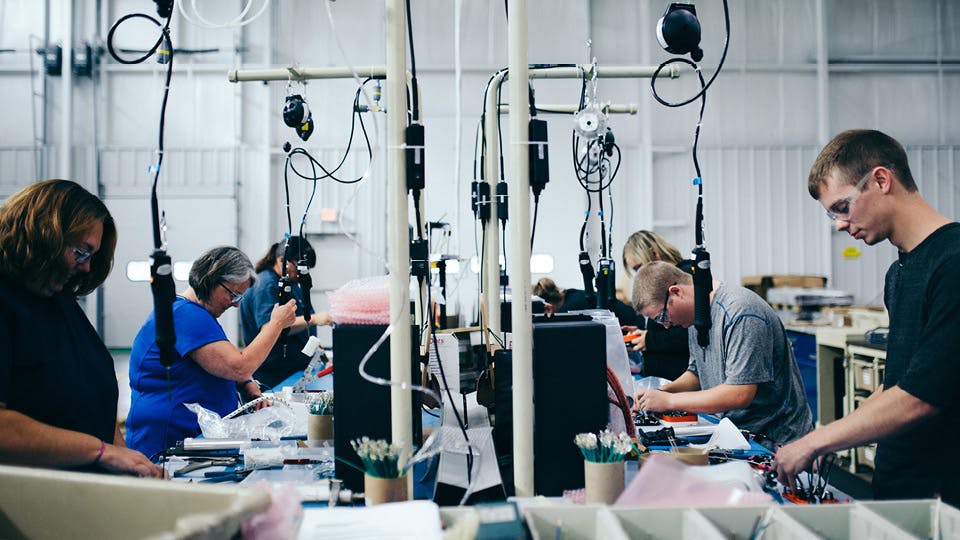 On the assembly line at Byrne's Lakeview facility.

Natural light pours through lofted windows inside Byrne's new Lakeview manufacturing facility, while a mix of Motown and country hits are played throughout the workday. Bald eagles roam around the skies above the building, and there are cornfields in the distance. This is rural Michigan.

The land this Byrne facility sits on has been nicknamed “The Pickle Docks,” an affectionate term for the pickle companies that occupied the area until the 1960s. The building sits on the edge of Tamarack Lake, which the locals joke still tastes like vinegar. The area had been undeveloped until Byrne built their state-of-the-art manufacturing facility. 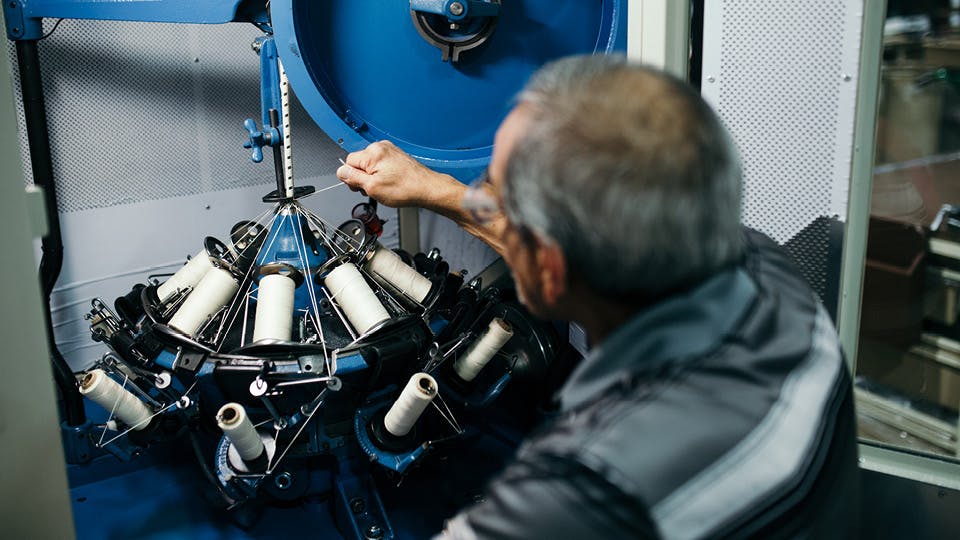 Take Gayla Pratt as living proof behind Byrne's commitment to their employees. Before she found her job at Byrne in 2006, she worked as a school bus driver for 19 years, and also owned a screen-printing and embroidery business, but was looking for something with higher pay.

She'll have been with Byrne for 10 years on December 5, 2016 (she'll never forget the day), and since she lives in a small town near Lakeview, her position was transferred from Rockford to Lakeview once Byrne's new facility opened. 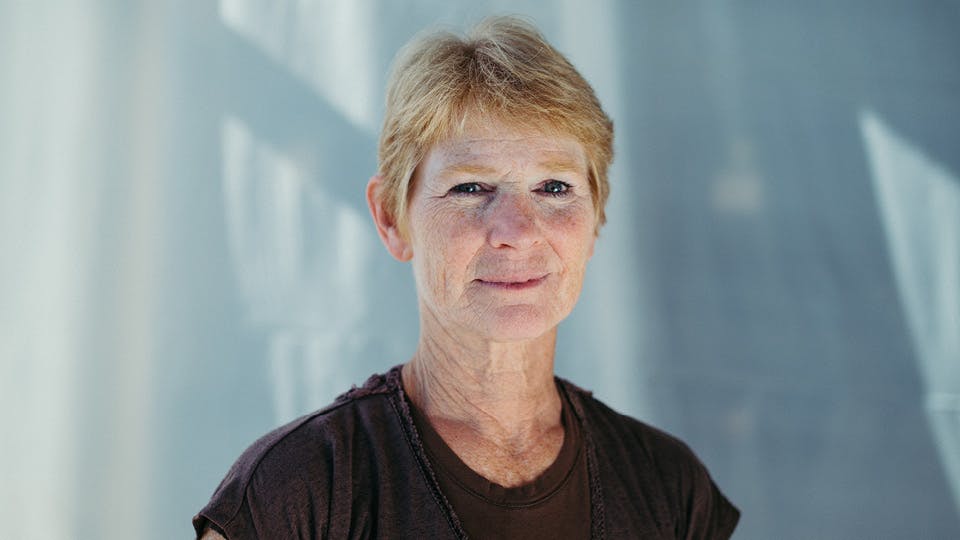 Gayla Pratt (pictured above) works in the shipping and receiving department at Byrne.

"When I first started at Byrne, I worked on the assembly line, wiring raceway units for office cubicles, but now I work in shipping and receiving and couldn't be happier," Gayla says with a big smile. "It’s a great opportunity, I love it!"

Gayla expressed how grateful she was to have a job closer to home that lets her have enough free time for her favorite hobbies, including making jewelry in the tiny studio behind her house. She's proud to have an employer like Byrne that supports small towns like hers.

"In Lakeview we have a few business owners, but it’s a small town and it's a rural countryside," she says. "I'm excited that Byrne brought more jobs to the area. When I was looking for a job 10 years ago, there was nothing." 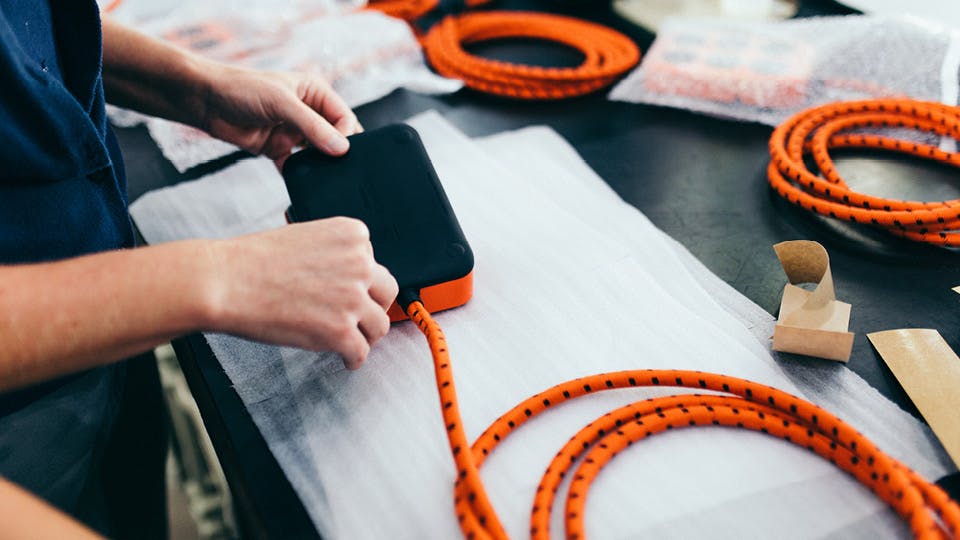 New to the workforce, 23-year-old Shane Puite is an assembler at Byrne, who may not have experienced the hard times Gayla did, but is just as excited to start a new chapter in life.

When asked how he likes working on the assembly line compared to with family members, he explained how it was a natural evolution of what he was already good at. "It's really not too different, because I was always working on tractors and doing electric work," Shane says. 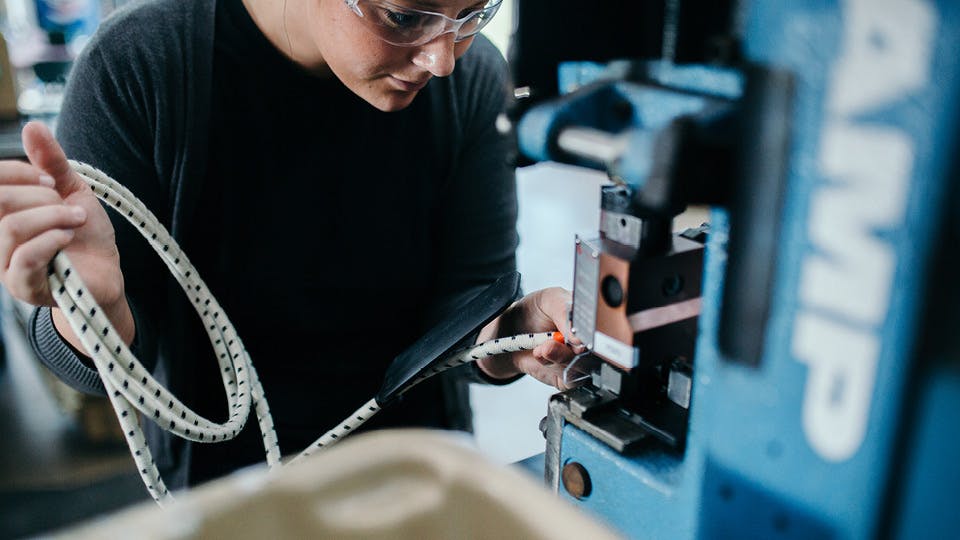 When the new Lakeview facility opened earlier this year, even the local school wrote letter of gratitude to the company for opening up in their community.

"We have to take care of the communities here," Dan says. "Partnering with a company like Shinola that values human talent and manufacturing skills was a tremendous learning experience."