History of the Modern Wrist Watch 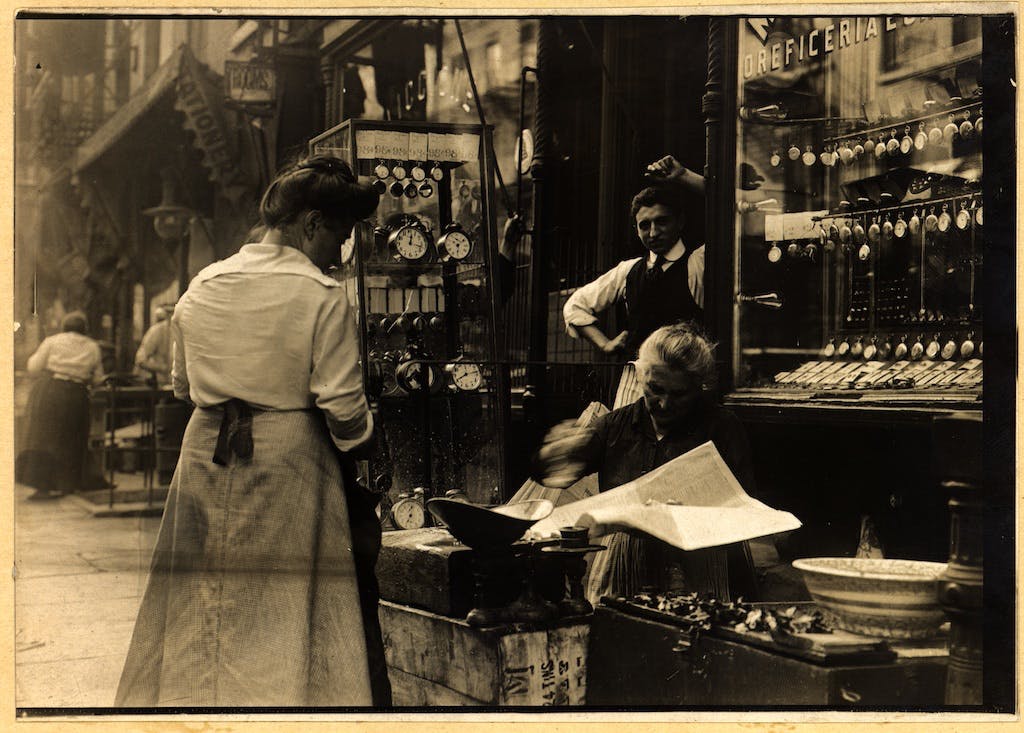 1275, Invention of the mechanical clock

The modern watch traces its lineage to the mechanical clock. These clocks typically didn’t show the time, but tracked it and tolled loudly on each hour. Clocks began to be used in manors and towns to help people track the time.

Throughout the 13th, 14th, and 15th centuries, blacksmiths were the primary clock makers––and that meant that most clocks were made out of iron.

It’s fitting that wearing watches would begin in Switzerland. There, in the name of the Reformation, John Calvin banned wearing jewelry in 1540. This left all jewelers out of work, and many of them transitioned to clockmaking. Once clockmaking fell largely to jewelers instead of blacksmiths, clocks began to move from iron to finer materials like brass, bronze, and silver.

Also around this time, we see clocks merge with jewelry. Perhaps Calvin’s followers found a loophole in the jewelry ban by wearing something more practical, a device that told time. First, pendant timepieces became popular. This stayed the preferred timepiece fashion for women for hundreds of years. However, when King Charles II introduced a new fashion—waistcoats—it became less practical for men to wear their clocks as pendants. The pocket watch then became the celebrity. While they were not as popular as the pendant or pocket watch, wrist watches were also first developed around the same time as all these jewelry timepieces. And with that, the long history of modern watches truly began.

1571, Elizabeth I receives an arm watch

Robert Dudley is said to have gifted an arm watch to Queen Elizabeth I. However, this still didn’t begin the wrist watch revolution. This piece of history is often forgotten, and many point to the Queen of Naples as the first owner of a wrist watch in 1810.

The Preface for Modern Watch Technology

Galileo began his research on the pendulum as early as 1602, but it was over 50 years later that Christian Huygens had the pendulum clock patented in 1656. The pendulum is important for many reasons, but it’s pertinent to modern watches in one specific way: The pendulum keeps track of time quite accurately.

Clocks, pocket watches, and pendant timepieces all tracked only the hour until the late 17th century. They had also tracked the hour somewhat poorly. While the pendulum made timekeeping more accurate, it was large and used in clocks instead of wearable watches. While previous watches were sometimes off by hours per day, the invention of the balance spring in 1657 reduced the error to about a ten-minute difference between the watch and actual time. This increased accuracy led to placing a minute-hand on watches.

Moving into the Enlightenment, scientists realized the importance of accurate time keeping. They noticed that the balance spring was quite affected by the temperature. So, depending on the heat or cold of the day, you might get a different time on your watch. The invention of the temperature compensated balance wheel once again improved watch accuracy.

England had taken the lead in manufacturing watches for most of the 17th and 18th century. However, they focused on selling pocket watches made for the upper class. The Waltham Watch Company in Massachusetts was the first to really gain ground using interchangeable parts. The Waltham Watch Company was the first of many to start making watches that were more widely distributed than was previously possible.

The wrist watch first emerged right alongside the classic watches in the 17th century. But by roughly 1850, wrist watches had become popular enough that most watchmakers included what they called bracelets in their production, bracelets being their term for a wrist watch. These bracelets were mostly worn by women, as had been true for hundreds of years now.

The practicality of war introduced wrist watches to men in the late 19th century. Strategies that required precise timing, without visibly signaling, required a timepiece. It was noticed that while riding a horse, it was easier to tell time from a wrist watch than from a pocket watch.

Around this time, companies began advertising “watch wristlets’ and ‘campaign watches’ for men. These modern watches largely resembled a men’s pocket watch, but it was now fitted with a leather strap that could be fastened around the wrist.

From an early aviator looking for a watch best-suited for his piloting needs to soldiers requiring sturdy watches in trench warfare, the wrist watch began undergoing multiple specifications and adjustments for different needs.

The wrist watch became commonly worn by soldiers during World War I. As the soldiers came home and became their country’s citizens again, the modern watch became a fashion, not a war tactic.

Part of a smart technology revolution, the smart watch appeared as early as 2000. Since then, smart watches have evolved to share many of the same features as the smart phone.