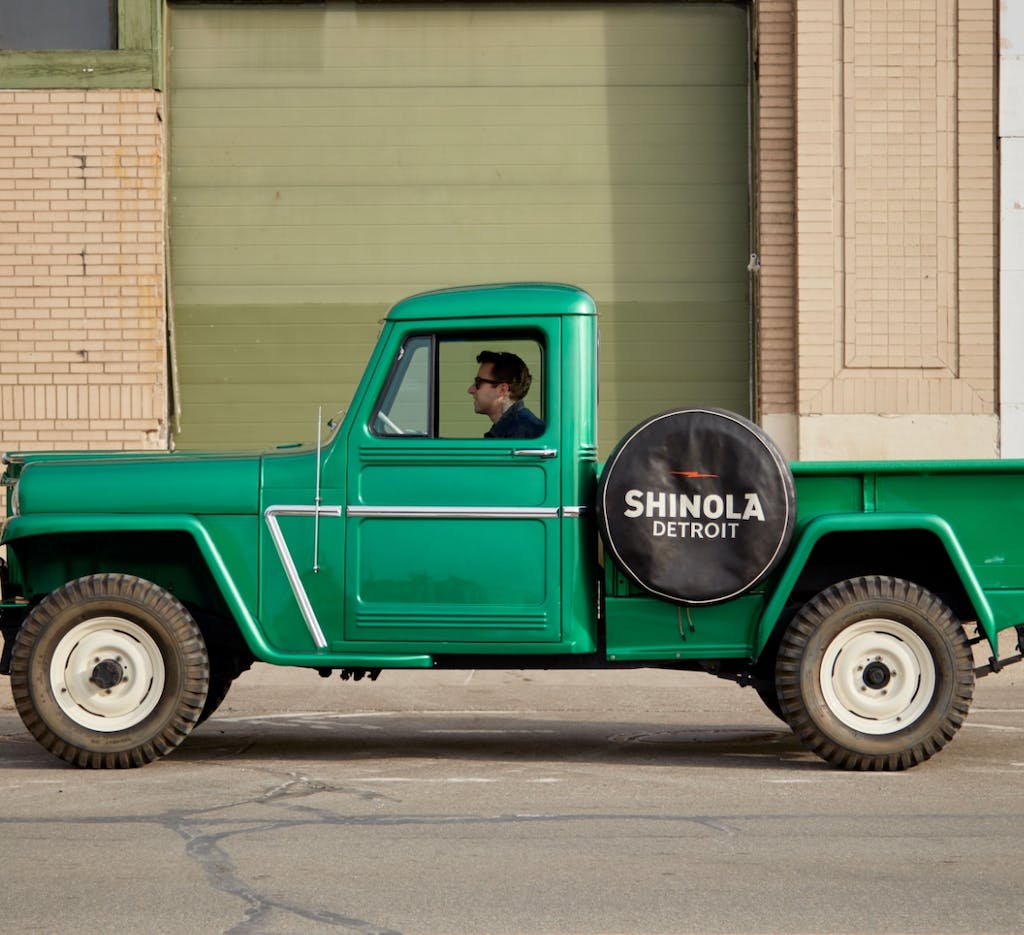 Round here, Zach Fox is that guy. A product designer raised near Ann Arbor and trained in Detroit, Fox was one of Shinola’s first interns, joining the cause before a single watch was sold, and before a single dollar was earned. Over the years, his designs have spanned the gamut — from the thoughtful packaging of the company’s first chronograph to the bespoke furnishings of Shinola’s physical stores. Bicycle concepts, production clocks, and the brand’s beloved power-supply items all have a piece of Zach in them.

Fox is as meticulous as he is creative, sweating over the spacing between stitches of yarn running through a beanie or blanket. He knows how to hold something up to the light to get the proper perspective; knows how to measure something for the hundredth time. Zach Fox puts the craft in American Craftsmanship.

If you’re lucky, you’ll run into Fox in the basement of Shinola’s headquarters sometime. This is where the brand’s beloved 1961 Jeep Willys pickup is parked. The Emerald-colored classic resembles a grandfather’s ancient tool box. It’s weathered, robust, and capable. The latches may stick and the hinges may creak, but it’s as good as anything that’s coming out of today’s factories.

Fact is, Fox is at home in a vehicle of this vintage. A car enthusiast who grew up with “Grease” on repeat and “Happy Days” on the TV, Fox is a bad-ass version of Wally Clever mated to a silky-smooth version of The Fonz. His Buddy Holly eyeglasses are distinctive, his pompadour hairstyle is pure Elvis.

The Willys he protects plays a supporting role in Shinola’s efforts to tell its brand story. Recently, Fox and team flat-bedded the vehicle to a local Christmas tree farm for a catalog photo shoot. Years earlier, the truck’s keys were misplaced and the Willys had somewhere to be. Fox, relying on years of experience, executed a quick ignition-switch replacement.

On a recent Friday morning, before driving the vehicle a mile-and-a-half to Shinola’s flagship Canfield store, Fox checked the Willys’ vitals, then wiped down the sheet metal and chrome. Spark plugs? Check. Oil levels? Check. Tires? Probably could use some air.

Once he’s content, his feet take charge of the accelerator and clutch. The T-90 three-speed manual poised in neutral, Fox gives it a few cranks.

The “Super Hurricane” six-cylinder engine gurgles for a moment, before roaring back to life. The truck is hefty – weighing 3,000 pounds – but its girth doesn’t prevent the body and bench seat from slightly jigging along with the melodious vrum-vrum-vrum of the motor.

I’m sitting in the cab while Zach is at the helm. We’re eager to accelerate but the Jeep Willys is 60 years old. It needs to warm up before hitting the field. So we talk about the wonderful machine we find ourselves in.

Shinola’s Willys truck is one of the millions of Jeeps to come out of Toledo since Willys-Overland Motors (Jeep’s once-upon-a-time owner) bought a manufacturing complex near the banks of the Maumee River more than a century ago.

The pickup’s design dates back to the 1940s. It is the epitome of rugged, with Jeep copy writers selling this vehicle with a cache of predictable slogans, ranging from “Action packed newcomer to the light 4×4 truck field,” to “All truck, all over.” A post-WWII print ad declared “You can’t stop bad weather, but weather that stops others won’t stop this truck!”

This weather-beater is an assemblage of original parts and customized upgrades. Perhaps the most noticeable is the addition of wood cabinetry in the bed, which allows the Willys to double as a display for Shinola products when it is parked outside a store or stationed at an event.

Originally, Willys instrument panels were spartan, carrying only a manual-choke knob, a multifunction speedometer, a wiper dial and a light switch. Over the decades, more gauges have been added to this specific version – including Phantom instruments measuring voltage, water temperature, and time of day. At some point, temperature controls and air vents were installed. A 1990s-era Pioneer radio is tucked in the glovebox; RockFord Fosgard speakers are hidden under the dash above the footwell.

Other modifications include a piano-themed two-tone bench, a simple dome light, and a skinny driver’s side aluminum antennae. A one-of-a-kind black vanity plate with an orange Shinola lightning bolt adorns an aftermarket black steel grille guard.

The 1961 model year was one of the last ones for the Willys truck. The 1960s marked the launch of the Gladiator pickup, a vehicle that significantly modernized the Jeep portfolio. This makes the Jeep Willys a testament to the high automotive-design era that turned automotive designers Harley Earl, Bill Mitchell, and Edmund Anderson into gods. Chrome was expected, sex appeal was standard.

The Willys’ vital organs are shielded by an eight-slot grille, iconic round headlamps, and curvaceous fenders that flare outward. Passengers look through a split-windshield, like those fitted on a classic Oldsmobile Six or Ford Fairlane. Chrome treatments, including windshield wiper brackets and a swooshing accent strip, garnish the body. A majestic “W” serves as the brand’s logo, which sits atop the grille in the center of the hood’s ledge, and also in the center of the steering wheel.

Four chunky all-season tires, designed for light-truck use, are wrapped around painted white steel wheels. A spare one rests on a running board behind the driver’s side of the cabin. The front cap is fitted with a manual locking hub, essential for transferring from two-wheel to four-wheel drive. An additional shifter inside the cabin is also part of the two- to four-wheeling transformation.

As Fox steps into the gas, the vehicle springs to life. Its top speed is no more than 55 miles an hour, but even a crawl puts a smile on both our faces. I laugh – and pray a little – as Zach maneuvers this vintage machine, built before automatic steering systems that make tight turns a relative breeze.

Fox isn’t phased. He started working on automobiles at a young age. His father taught him bodywork, paint, welding, sheet metal forming, and fabrication. Over the years, he amassed a love for cruising, lowriders, four-wheel drive trucks and off-roaders. His first few vehicles included a 1972 Nova, a 2005 Jeep Wrangler Unlimited, and a 1953 Chevy pickup.

Today, his garage includes a ’59 Impala, a ’40 Ford, and a ‘50 Chevy Panel Truck. On the day we met, Fox was driving his 1987 Chevrolet K20 pickup. As with his other vehicles, Fox has made requisite upgrades and modifications on this truck. Recently, he replaced the motor with a 350-cubic inch GM Performance Parts crate engine, which makes 330 horsepower and a beautiful growl. Fox also pulled out the original automatic transmission and slotted in a four-speed manual transmission. Why move to a stick shift on a daily driver?

From Long Island to Los Angeles: A Travelogue

Warroad: Home To The Toboggan Makers