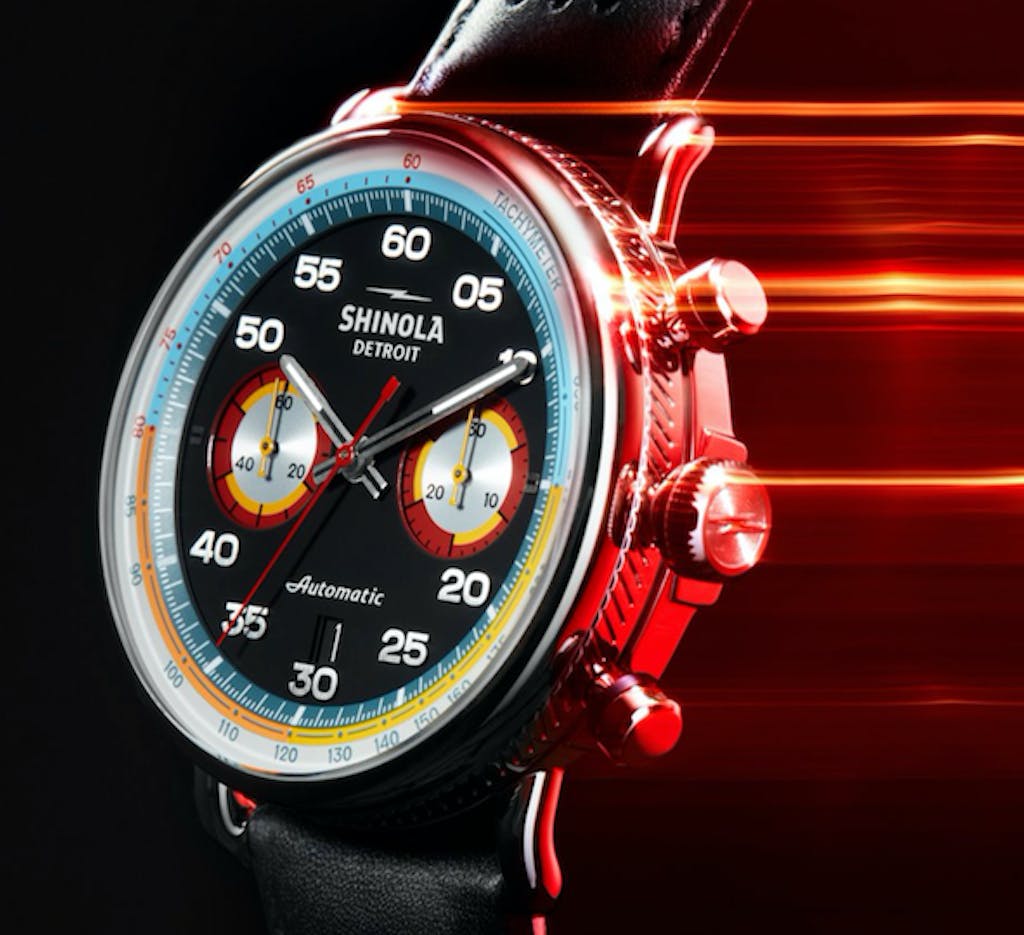 of the Canfield Speedway

The first lap of the Canfield Speedway is sold out.

The last time we sold out of a watch this fast, we hadn’t built one yet. We’ve learned a lot since then. Like how to endure a Detroit winter, and build our first-ever automatic chronograph.

Add this to that list: Never underestimate the passion of the Shinola family for an uncommonly well-made watch, thoughtfully designed and built to last. Thank you for giving our first-ever automatic chronograph such a warm welcome.

This September, join us at the starting line once again for the all-new second edition, Lap 02. Same engine. New paint job. You can join the waitlist here to be the first to know about its release.

Read on to learn the inspiration behind this extraordinary watch.

No sooner had the Runwell Automatic collection launched than the vision for Shinola’s first automatic chronograph crystalized. With years of development and fine-tuning ahead, the team began to tackle their most daunting project to date: Design an automatic chronograph that could stand on its own in an ultra-competitive space in the watch industry. 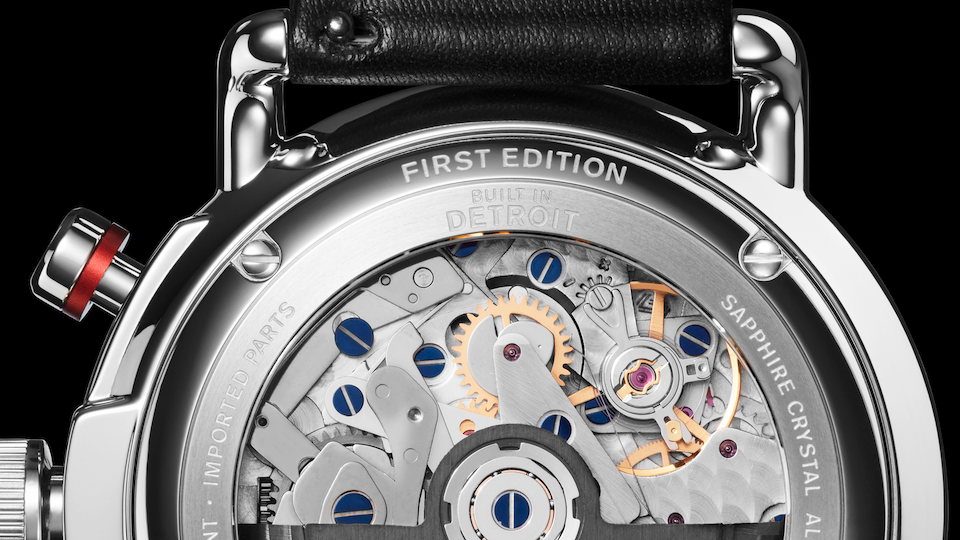 At Shinola, challenge and opportunity are viewed as one in the same. At the starting line of the unnamed Automatic Chronograph project, the watch design team was given one directive: freedom.

Every Shinola watch starts with a story: A spark, a curve, or a feeling. For the technically impressive automatic chronograph, the team turned to the Motor City in a way Shinola never has before, diving deep into the lore of four wheels.

They pulled up layers of American history and racing heritage, peeling back the stories of Detroit. The designers looked back long before professional racing, further into history until they came across the legend of Red Voght and the Detroit rum runners. 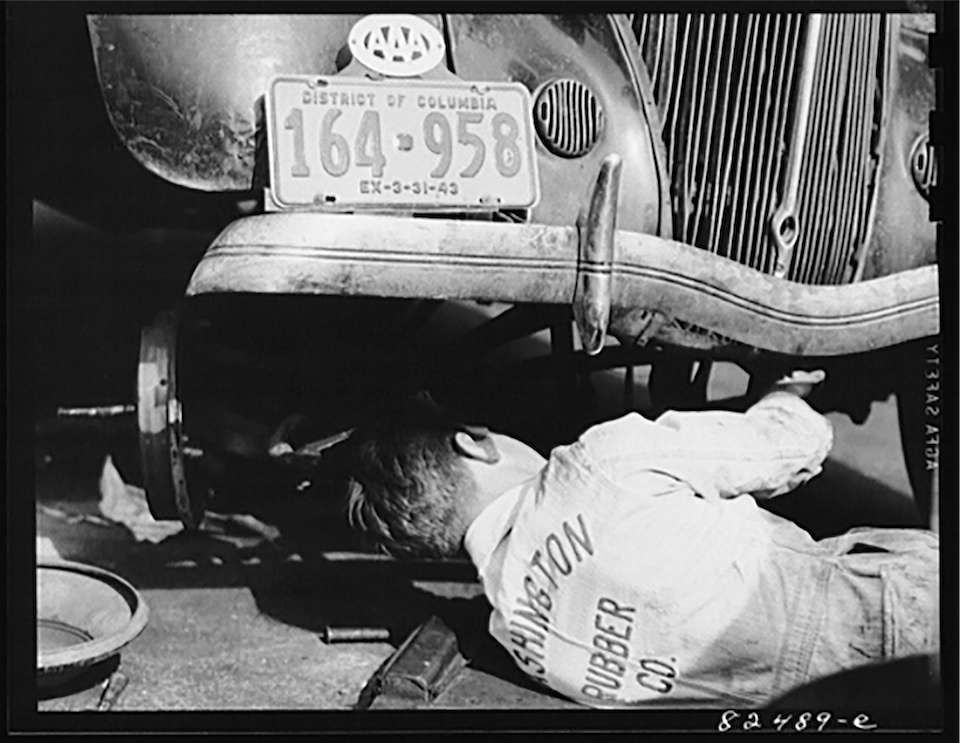 In the prohibition era, bootleggers enlisted the help of master mechanics to make their basic model cars faster than the fuzz. With weight shaved here and an engine tweak there, mechanics like Voght sent rum runners speeding off into the night.

This early form of tinkering and modding was just a taste of the hot rodding to come. After America’s young men returned from World War II with mechanical skills, time to burn, and a penchant for thrills, stock car racing accelerated. Tinkered to perfection by homegrown mechanics, each car became personal to the driver behind the wheel—who was often the mechanic under the hood. 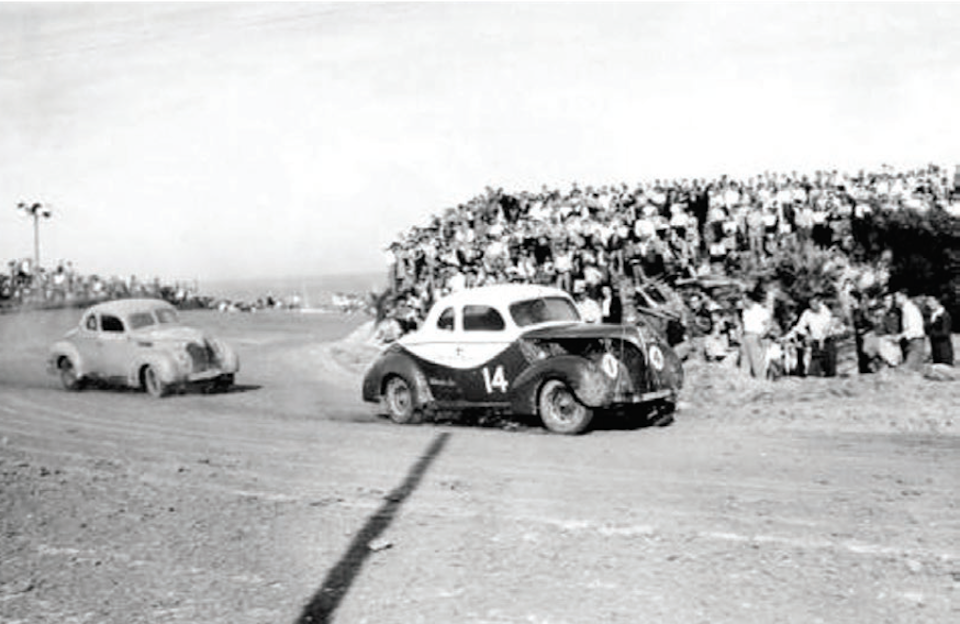 Scrappy and resilient, these are the cars and their drivers that Shinola designers were drawn to. Stories of the constant drive for improvement, not for a trophy or grand prize, but for the pride of it all. They weren’t the muscle cars we know today. What they lacked in horsepower, they made up for in heart.

Inspired by this uniquely American need for speed, the concept of the Canfield Speedway crystalized with the addition of the tachymeter. From the Greek tachos metron—speed measure—the Canfield Speedway’s fixed tachymeter scale allows the wearer to easily measure the speed of a vehicle over a known distance. From there, it was all tinkering. 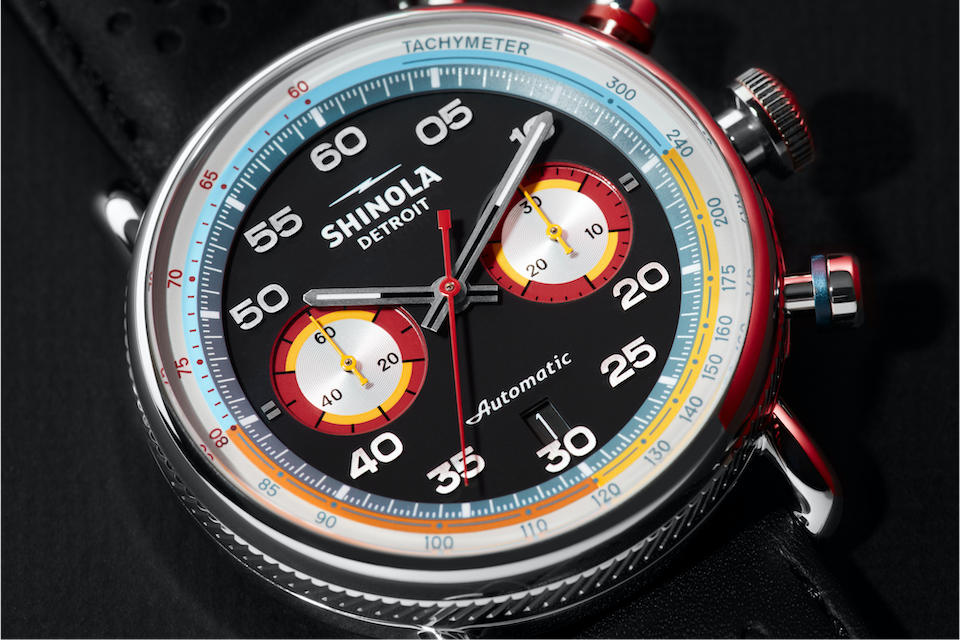 BUILT FROM THE BLOCK UP

Nothing worth having comes easy, and the Canfield Speedway is an automatic chronograph that requires mastery to build. It took every bit of expertise and skill for the design and manufacturing teams to perfect.

Everything from the engine to the paint job to the perforated leather strap was tinkered with and toiled over. Designer Molly W. took watch renderings home and colored the dials in with more than a dozen different shades and combinations, searching for a story of harmony within the vibrant, expressive paint jobs of stock cars.

Iteration after iteration—lap after lap—the team pushed to create the most individual, Shinola-built automatic chronograph possible. 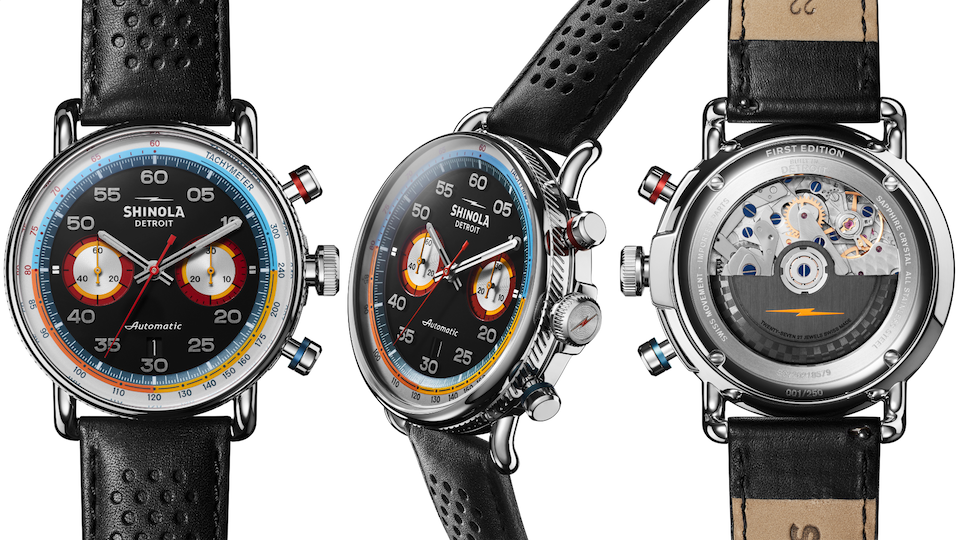 “What it takes to make a mechanical automatic chronograph watch is more than just a look. This watch is mechanics and physics combined with math and technology. It is made from design creativity and the craftsmanship of skilled people performing the very fine adjustments and finishing of such a complicated machine.”

From the story that inspired the design to the quality, detail, and craftsmanship on full display, the Canfield Speedway is a marvel. The matte dial is punctuated by 60-second and 30-minute sub dials styled after two-tone wheel designs, and the multicolored tachymeter pays tribute to the paint jobs of the past.

The Swiss-made Sellita SW510 BH movement is no ordinary engine. With 27 jewels and a 48-hour reserve, it doesn’t just keep up. It sets the pace. To celebrate our first automatic chronograph, we marked the occasion with a custom Shinola checkered flag rotor on the movement, viewable through the full exhibition caseback. 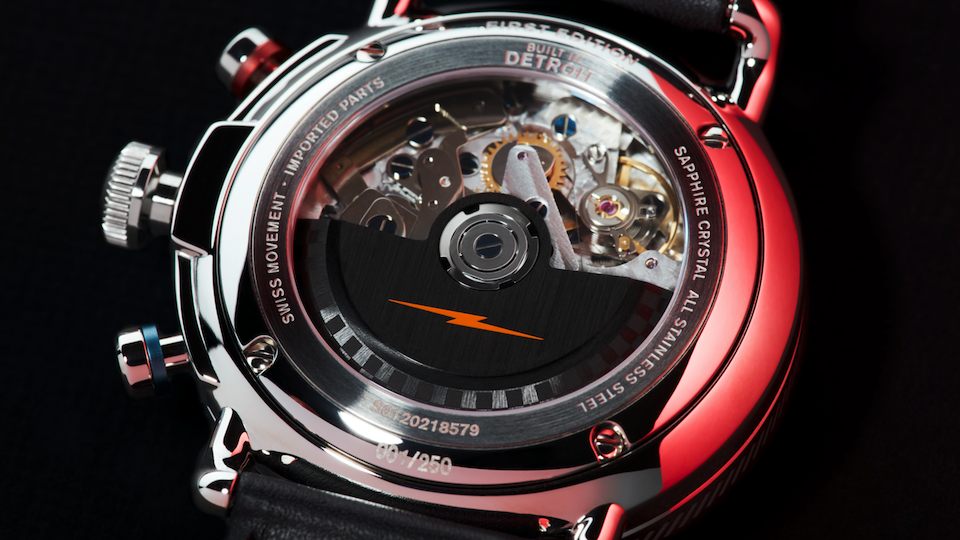 Every Canfield Speedway comes complete with a bespoke metal toolbox customizable with an engravable badge. Dive into the story behind the watch with the included booklet, and live the thrill of early American racing with a custom poster illustrated in-house by Shinola designer Zach F. 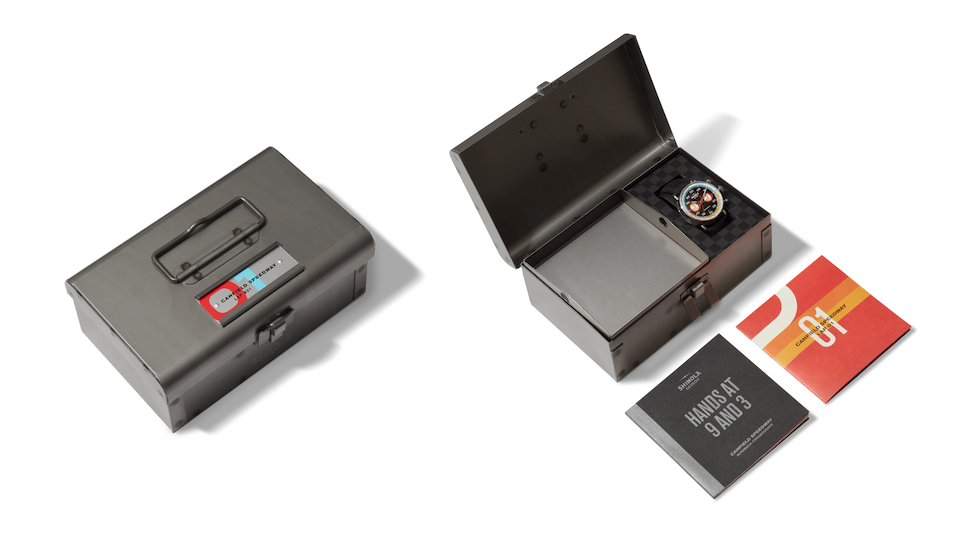 This watch was inspired by master mechanics of the early days of auto tinkering and customizing. These mechanics knew their automobiles so well that they could measure with just their bare hands, no calipers needed. 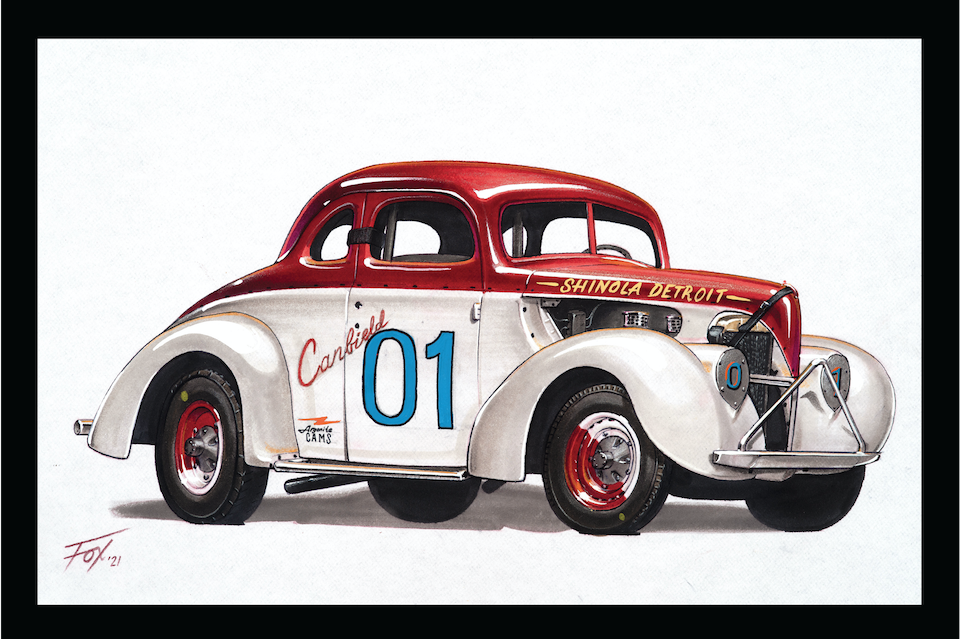 Tinker, drive, repeat. It was all for the pursuit of that next mark—the fastest lap, tightest corner, smoothest shift.

The same goes for watchmaking: Time will always push you. It’s how you push back that counts. With that, the Canfield Speedway Automatic Chronograph is a mark of our relentless commitment to improvement. Because there is no finish line when it comes to excellence. Only the next lap, and the next after that.

Check back on the Journal soon for a special Canfield Speedway heritage piece on the great American pastime: Racing. This September, join us at the starting line once again for the all-new second edition, Lap 02. Same engine. New paint job. You can join the waitlist here to be the first to know about its release.

The Timeless Appeal of Good Luck

The Force of Nature