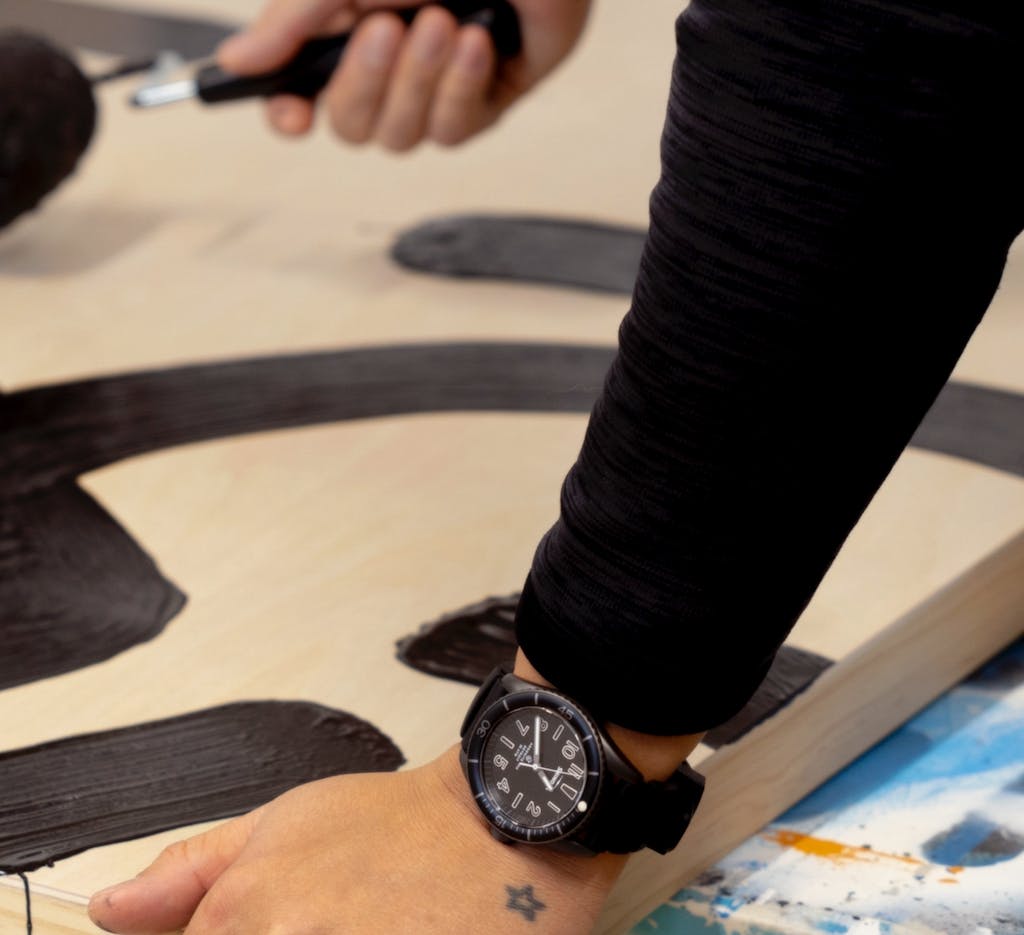 Mike Han doesn’t shy away from the word “failure.” In fact, his approach to it has helped define his success.

A lifelong artist, he’s spent recent years applying his creativity primarily to sushi while dabbling in painting on the side. Han’s been a chef at prestigious sushi restaurants in major markets, spanning Chicago to Miami, New York to Denver. Along the way, he tried his hand at opening his own ventures. His fourth, a concept in Ann Arbor, was poised to open in early 2020. When COVID-19 pandemic changed the world, Han’s life changed along with it.

“I put my heart and all of my energy into each of these ventures, and I was so depressed,” he recalls. For six months, Han struggled to make sense of his path—and make rent. Out of a job and caught in a quagmire with unemployment payments, Han received a lifeline in the form of a commission for a mural that paid his expenses through December. He viewed it as a signal.

“It was a strange year—but I made the decision to go all-in on art.”

What began with disappointment ended in success. Han’s commissions have blossomed, going from one a year to one a month. “It’s been the best year of my life,” he said, careful not to forget where he was just a short time ago.

Han is well acquainted with Shinola having served as a creative consultant on everything from bicycle design to scouting the location of the company’s headquarters a decade ago.

“Shinola is full circle for me, so getting to interact with the brand is really exciting and impactful for me.”

“Full circle” is actually an understatement.

In 2012, while working on an art project in Detroit called Woodward Windows, Han struck up a friendship with a business tenant on the 1400 block and gained access to the abandoned upper floors of the building. Among many treasures Han found he salvaged blueprints from the Meyer Jewelry Company.

Over the last 100 years, that property housed many retailers, including the T.B. Rayl Co. store, Liggett’s Drug Store, Lloyd’s Furs, Sally Frocks and none other than the Meyer Jewelry Company’s “Meyer Treasure Chest of Jewels” store. In 2019, the Shinola Hotel opened its doors in that same restored historic building.

Inspired by the history of the blueprints, Han embarked on a project with a story that only he could tell through a technique he calls modern vandalism—the conscious decision to destroy materials, products, and space in an effort to create value.

Using bone black acrylic paint made from charred animal bones—produced for over 150 years by Detroit’s Ebonex Corporation—Han used the discarded blueprints as a canvas for his signature style that is influenced by Korean calligraphy, graffiti, and modern design.

Reborn as an installation in his own apartment and richly layered with meaning, the pieces speak to the motto of the city of Detroit itself: “We hope for better things; it will rise from the ashes.” Fittingly, it’s called Altered Plans.

Almost a decade after finding the blueprints, Han created an unconventional rebirth story that could truly only happen in Detroit.

Sushi is—and always will be—part of Han’s identity. This year, he’s committed to practicing his passion not for a crowd, but for himself.

“I know that I’m not going to be in restaurants anytime soon, so I’ve taken it upon myself for this year for my personal wellness to bring sushi back into my life.”

Han volunteered to test-drive the Shinola Duck for us recently. He chose the surf watch for its sturdy, water-resistant nature—a quality that’s useful in art and in the craft of sushi, as well. “My hands are always in water!”

For the photoshoot, Han prepared a touch of sashimi. His craft was on full display—the confidence of a professional with the flair of an artist. It’s obvious that no matter what medium he works with, Han will continue to rise.