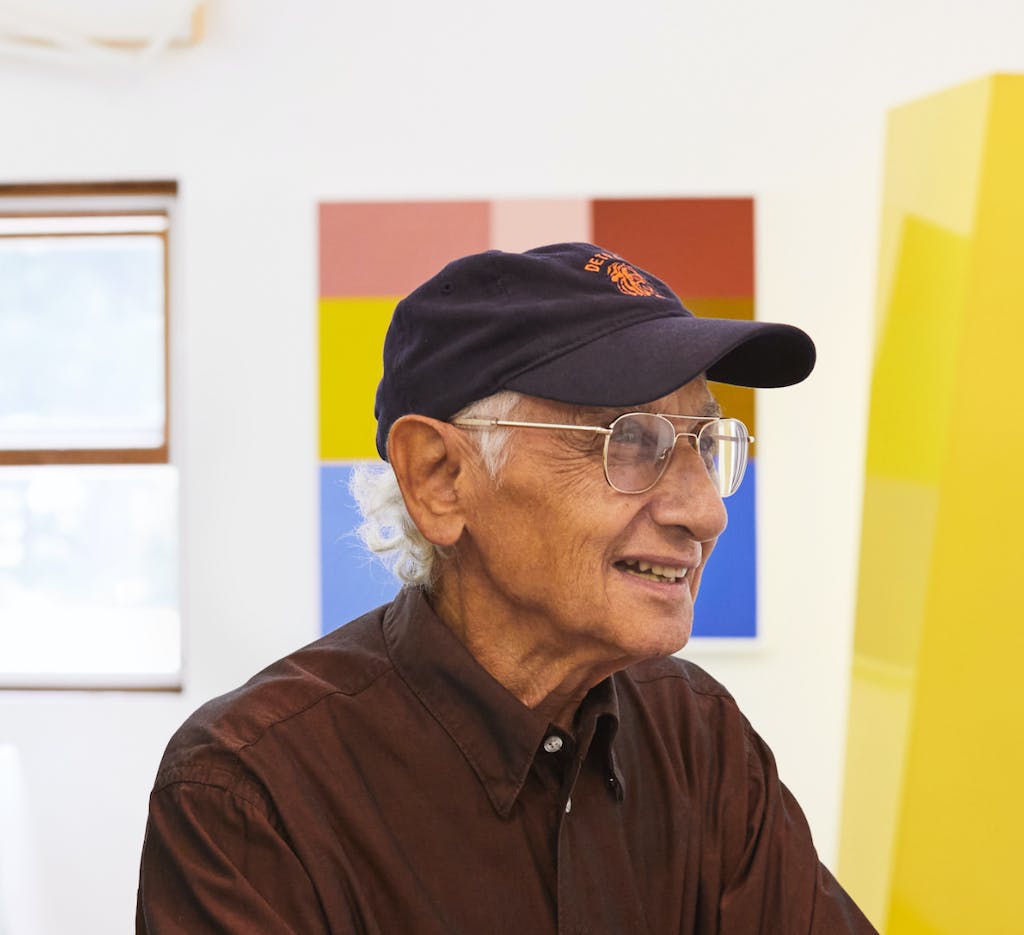 David Rubello’s romance with art began nearly a lifetime ago when his kindergarten teacher opened a drawer, revealing several jars of beautiful color. Awestruck, the young Detroiter’s imagination was sparked.

“I said to myself ‘that’s what I want to do,’” Rubello, now 86 years old, recalls during a recent conversation. This passion to create visual masterpieces has led him far and wide — from automobile design studios in the Motor City to art schools in Europe – sculpting, teaching, sketching, and painting.

Today, sitting in his kitchen in the rural confines of Ray Township, Mich., he’s still the boy looking at that drawer full of color. “That’s where I’m still at. I’m still at that place.”

It is here, in a studio with prints hanging on every wall and neatly stored in a filing chest, where Rubello’s vision for his art is best understood.  These masterpieces, he says, aren’t meant to simply be looked at.

“A friend of mine said, ‘I like art that does something,’” Rubello explains, spinning a piece on the kitchen counter. Three stacked triangles twist, showcasing all the trademarks of his playful style: Color. Shape. Line. The incalculable element of imagination. “Well, this does something!” he says wryly.

As the piece spins, he gestures to its changing form. “What a piece like this does is involve the viewer. And because it can do that, it renews itself.”

Rubello knows a little something about renewal. Born in Detroit in 1935, during an era known as the Motor City’s heyday, this artist has been reclaiming physical objects and himself since shortly after he was introduced to his passion in kindergarten.

In his youth he drew and cartooned feverishly. His mother liked it because it kept him out of trouble. Give him a canvas and colors, and she knew exactly where he’d be. His sketches, however, were anything but random.

For instance, he started to sketch out scenes from the Playbills his sister brought home. Back then, issues had drab cover photos in black and white. “I had to invent my own colors,” Rubello says, flipping through an archive that captures his love of mixing brilliant hues.

In one, two men in heated conversation are rendered with meticulous attention to detail and color. Another features a character actor, gesturing off the page and brimming with emotion — the flush in his cheeks mirrored by the matador-red sweater he wears.

He said yes and soon found himself in heaven. “Everyone was an artist.” Rubello continued to Detroit’s Society of Arts and Crafts, later rechristened the College for Creative Studies, where he learned from some of the era’s most influential mid-century artists.

Rubello, like many of the nation’s elite creative minds, landed at General Motors, working in the Design Sculpture Studio under the vision of legendary Harley Earl.

But he hungered for a style that he could truly call his own, so he took a leave of absence, headed to Italy, and studied at Accademia Di Belle Arti Rome. In learning from masters of formal figure painting, he gravitated to abstraction. This is the style he’s now known for.

“I found myself free—liberated—from the figure, to explore. It was a great period of discovery.”

Detroit, however, kept calling him back home. In 1972, New Detroit’s “Living with Art” initiative commissioned large-scale public art pieces meant to lift a city bruised by its recent history. Rubello made his mark, designing and overseeing the painting of Color Cubes on a historic high-rise on Washington Boulevard.

For over forty years, Color Cubes was a fixture, as iconic as the Joe Louis Fist sculpture or The Spirit of Detroit statue. It was exactly the type of art that Rubello is most driven by—participatory. Detroiters weren’t just viewers. They were owners. It was lost, however, when Color Cubes was painted over in 2014 to make way for an advertisement.

Rubello’s work isn’t just meant for the walls of the home he shares with his wife, artist, and photographer Mary Keithan. And it’s not confined to public spaces or museums. It is a key piece of the new Shinola for Crate & Barrel Collection.

When the opportunity arose to curate art prints that honored and reflected the spirit of Detroit, Shinola’s brand art director, Michelle Potter, says Rubello’s work topped the list. To her, Rubello captures perfectly the cycle of loss and renewal.

“We see a piece with reverence for the past and the way loss shapes a community,” Potter notes. “But this work also frames something entirely fresh and new, with an eye to the future.”

Prints of David Rubello’s paintings Color Moves #6 and Color Moves #107 are now available through the Shinola for Crate & Barrel Collection.

“Color Moves” is Rubello’s latest series, an evolution of his previous “Color Ribbons” and an obvious heir to the early explorations of the “Color Cubes” mural.

The original may have vanished, but it is restored for a whole new set of owners. This kindergartner’s longing for color and renewal will live on in a new way. 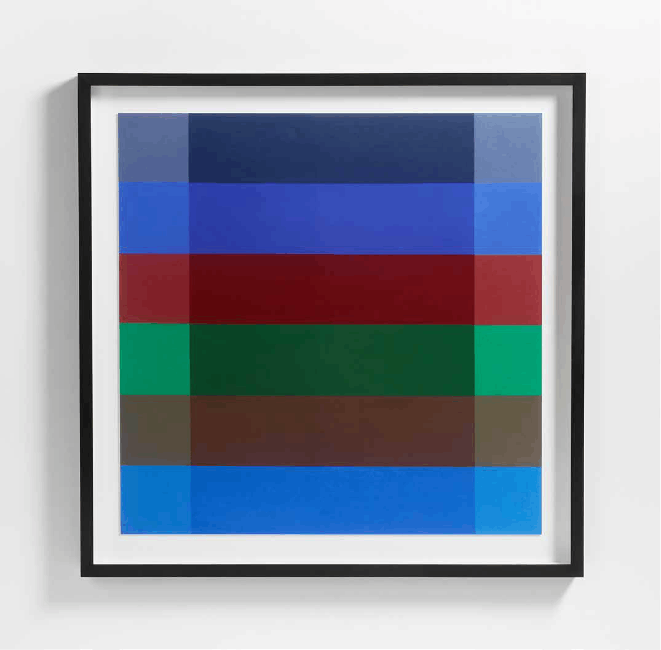 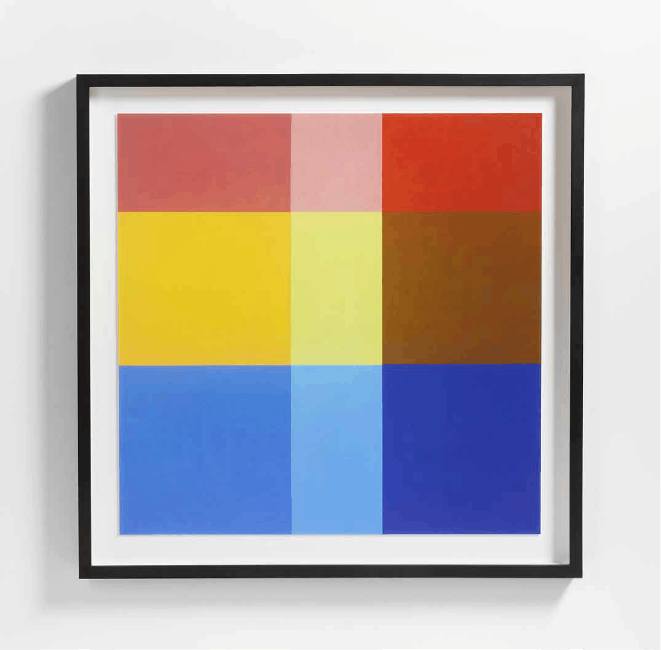