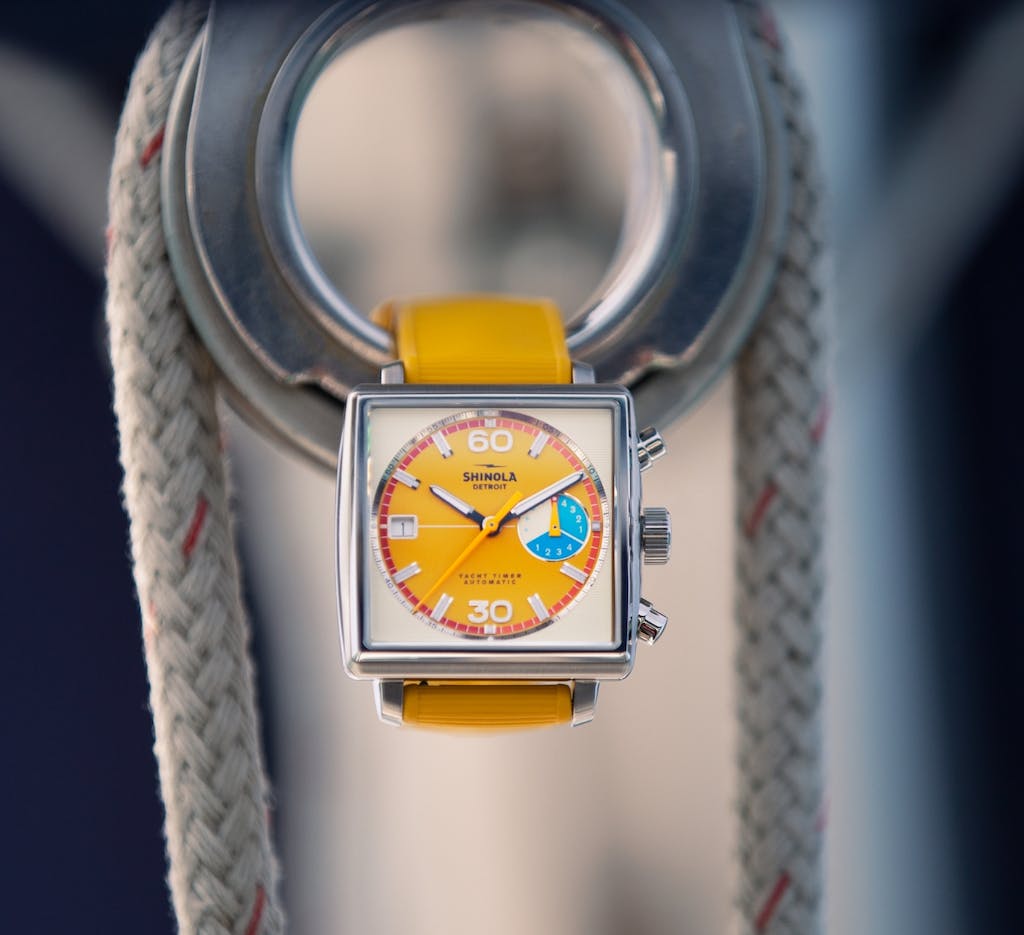 From fabled St. Clair rum runners to the very first boat clubs in America, the banks of the Detroit River are home to legends of sailing history.

There’s one particular Detroit-based tradition that has been passed on, unbroken, for almost a hundred years. It’s that of one of the world’s longest and most difficult fresh-water regattas: The Bayview Mackinac Race.

Lining the walls and glass cabinets of Detroit’s Bayview Yacht Club, there are tokens, models, and trophies of this race that stretch back for almost 100 years. Take a seat at the end of the club’s bar. Here, at the so-called “Dead Man’s Curve” that overlooks the Detroit River, you can hear about it firsthand from Old Goats (25 “Macs” raced) and Grand Rams (50 “Macs” raced).

Listen to these stories, and the name “recreational sailing” just doesn’t do this event justice. This is high-speed, cut-throat, neck to neck boat racing. With no motors.

First established by Bayview members in 1925, the race has taken place every single year since. Pandemics, depressions, storms—nothing has stopped it. According to Club lore, President Franklin D. Roosevelt’s office wired the club when he heard they might pause due to World War II. The message?

And every generation, a new wave of sailors answers that call.

Starting in the lower waters of Lake Huron, crews on hundreds of sail boats – the use of motor propulsion is strictly prohibited – traverse well over two hundred nautical miles in a race to the channel just off Mackinac Island.

The journey takes days. Most of the race, there’s no land in sight.

Like any monumental feat of endurance, the Bayview Mackinac Race is an experience best described by those who have actually sailed it. Mike and Bob Kirkman, along with a crew of their friends and family, have decades worth of experience between them—and the record to back it up—on their family boat, Hot Ticket.

They’ve raced hundreds of times all over the world. They have the stories to prove it: Tales of storms, fog, and freighters; of blown sails, broken lines, and snapped masts.

All crew members must know the ropes, more literally than landlubbers could ever imagine, and each has an individual responsibility: GPS. Weather forecaster. MacGyver. The job demands attention and awareness of one’s surroundings. If this sounds difficult during the day, remember that “The race is won during the night,” as the Kirkmans put it. Crews work in shifts, 4 hours on, 4 hours off, for the entire race, day and night.

“With the right amount of practice, there’s wordless communication,” between the crew, explains Bayview Yacht Club Commodore Lynn Kowicki. She’s raced with the Kirkmans on Hot Ticket for years. Spend any time on the boat or dockside, and the bond is immediately—and undeniably—evident. “We are so very fortunate to have a core group stay together for so long,” she says, smiling proudly.

The Commodore is the first woman elected into the position in Bayview history. In her mind, it wasn’t about being the first woman, however. It was about believing in herself the way her sailing mentors did. “I was told, ‘You’ll make a great Commodore one day,’ and I believed I would fulfill that.”

The sport has seen significant growth in the diversity of its members over the years. When the Commodore first started racing, the ratio was about 20:1 men to women. These days, it’s closer to 10:2. Bayview is deeply involved in sailing training and education, having recently established a sailing program, Hitchhiker Thursdays, for Detroit youth who may not otherwise have access to the sport.

For Hot Ticket skipper Mike Kirkman, his favorite memory of all time is an easy one to identify: Victory. And not just any victory. After coming runner up three times in a row to the same boat, Hot Ticket overcame their rival in the very last minute of the race.

This year, Mike’s sons Michael and Connor will once again join their parents in sailing the Mack regatta. It’s not their first time. Mom Trish raced while pregnant with both of them. They were 13 and 11 years of age, respectively, when they first crewed a Bayview Mackinac Race. Now in high school and college, the boys show no intention of giving up the family sailing tradition started by their Grandfather.

Named for this legendary competition, the Mackinac is Shinola’s most purpose-driven watch yet. It’s a first for the Detroit watchmakers: An automatic chronograph with yacht-timer functionality.

It’s a precision instrument designed to be passed on for generations. Just like the tradition that inspires it.

The unique chronographic function is also called a regatta timer. It was created specifically for sailboat racing. First developed in the 1960’s, regatta watches have taken various forms. From custom multicolored bezels to specialized movements with dial windows, the styles run the gamut. But no matter the decade, high visibility and easy readability have taken precedence in design, and accuracy is essential.

Shinola’s foray into this highly specialized sport chronograph is inspired by the deep sailing history of the Great Lakes. From the unique square case shape and double-layered dial to the bright canary yellow color, no design detail was overlooked in creating a truly standout regatta timer.

At the beginning of a regatta, flags and horns count down five, four, one, and zero minutes to start. This is where a yacht timer gives skipper and crew the edge of accuracy, crossing the starting line at, but never before, their synchronized yacht timer.

It’s a feat that takes complete mastery of the watercraft. And a very, very, reliable timepiece. Most of all, it’s vital to the final result.

Some, they say, can win the race just as it begins. 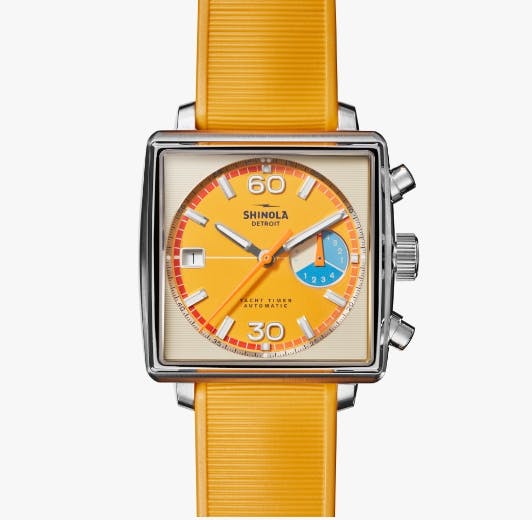