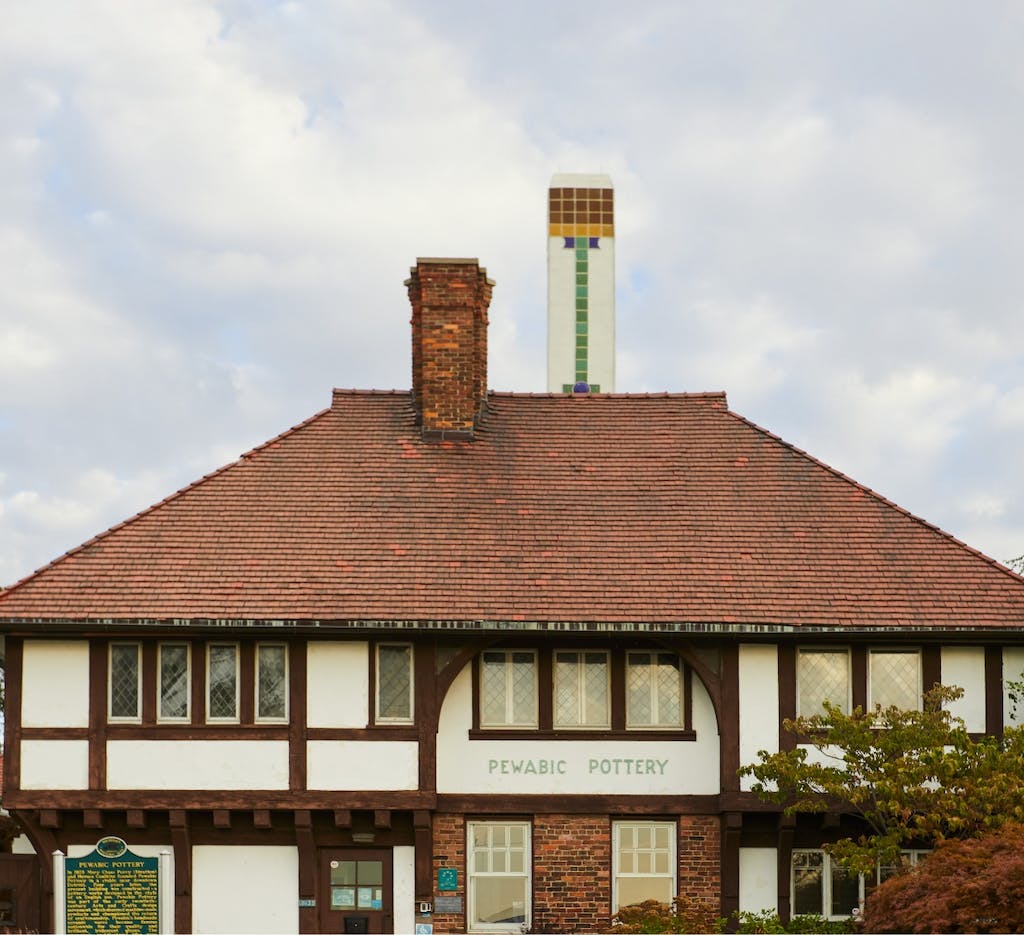 Nestled inside a turn-of-the-century Tudor Revival building off Jefferson Avenue on Detroit’s east side sits Pewabic Pottery, an iconic ceramics studio and education center that’s more than a century old—a timeless survivor from an era gone by.

Michiganians may recognize the name from the Pewabic region in the state’s Upper Peninsula, where copper mines were once abundant and where meaty “pasties” remain a beloved meal. It is here, in a land once teeming with native wildlife, that founder Mary Chase Perry Stratton took walks with her father as a child and found inspiration for her life’s work.

Stratton, and her neighbor, Horace Caulkins, opened Pewabic in 1903, which is now recognized as one of the foremost historic potteries in the country, and the sole operation of its kind in the state of Michigan. Pewabic’s vibrantly-colored, unusually-iridescent glazes have become the organization’s trademark.

Pewabic is best known, however, for its signature clay tile installations that have been incorporated into architectural design throughout its hometown. Here in Detroit, you will find Pewabic tiles in numerous edifices, including everywhere from the Detroit Institute of Arts to Jack White’s Third Man Records. Further abroad, Pewabic’s creations reach as far as the Shedd Aquarium in Chicago and the Basilica of the National Shrine of the Immaculate Conception in Washington, D.C., and this season, Shinola is pleased to announce that its two most iconic watch silhouettes—the Runwell and the Birdy—are now available with special-edition handcrafted clay dials made by artisans at Pewabic. Teams are also collaborating on pottery design for a candleholder that will launch in time for the holidays.

Starting in late 2017, Shinola’s watch design team began researching the International Arts and Crafts Movement as inspiration for their next collection. Pewabic – a hallmark manifestation of that movement – emerged as a natural partner.

“I have emails [with Pewabic] going back to January 2018,” says Greg Verras, design director at Shinola. “The project showed a lot of early promise.”

That promise, however, presented challenges to Shinola’s technical teams. Coupling handcrafted pieces of pottery with watchmaking precision seemed nearly impossible. But Shinola’s designers, in tandem with the company’s components manufacturer and Pewabic’s senior designer Genevieve Sylvia, were determined to find a way.

“The initial prototypes were chipping, and we could not machine them to the correct dimensions,” says Verras.

Yet, the ideas kept flowing. Finally, they began experimenting with the clay body, which “was the perfect level of workability for machining,” Verras recalls. “Not too hard, not too soft.”

Having found a viable path forward, both parties dug in. They found using the clay body allowed the nonprofit manufacturer to salvage tiles from Pewabic that had minor imperfections and could not otherwise not be repurposed.

The end result, says Verras, allows Shinola to utilize a decades-old clay-making process to shine a light on incredibly talented artisans. Glaze specialists, potters, and painters have made Pewabic their playground for discovery and creativity over the last century.

“We fell in love with the process that goes into making the clay….a very underappreciated part of what Pewabic does,” says Verras. “And we have been known to showcase the unsung heroes.”

To hand produce the dials, Pewabic utilizes many of the same clay-making methods and equipment employed over the last century.

“The same clay mixer and filter press used in the early 1900s is responsible for the final stoneware dial you’ll find on the watch face and the candle holder tile,” says Amanda Rogers, Pewabic‘s marketing director.

Pewabic artisans first make clay by mixing dry and wet ingredients in a belt-driven clay mixer dating back to 1912. The clay mixture is then pumped into a filter press, where pressure forces out excess water to create a pressable clay that can be formed into tiles using plaster molds.

Once formed and dried, tiles are loaded into one of Pewabic’s several kilns for bisque firing, which prepares the clay for glaze. Once a coat of glaze is applied, the tiles return to the kiln for a high-temperature firing, which strengthens and hardens the clay.

After cooling, tiles are unloaded and subject to a rigorous quality check. Any piece that doesn’t make the cut is considered “seconds” — which Shinola is honored to lend a home. “By choosing to feature the clay body in the watch faces, Shinola is repurposing tiles with glaze and surface imperfections which could not be used for installations,” says Rogers.

Pewabic produces thousands of tiles annually, which are used in architectural installations of varying scale. Visitors of the 118-year-old workshop can purchase individual tiles in the gift shop.

Shinola cuts and polishes the clay discs it receives from Pewabic to precise measurements for each watch dial—a process the team refined during the development of their Petoskey stone dials. A pad printing process is then used to apply the numerals to the dials. The remaining components are assembled with the dial in Shinola’s Detroit factory.

The end result is a Runwell or Birdy watch that brings together the expertise of two Detroit icons, one that has been on the scene for more than a century and one that is about a decade old.

The Pewabic Runwell and Birdy watches, as well as the exclusive candle holder, are now available to shop as part of Shinola’s 2021 Holiday product offering. 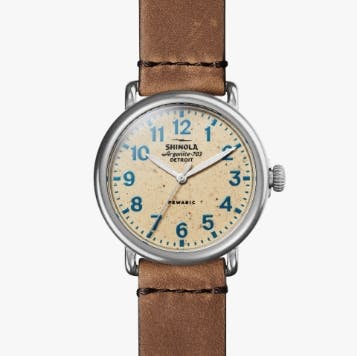 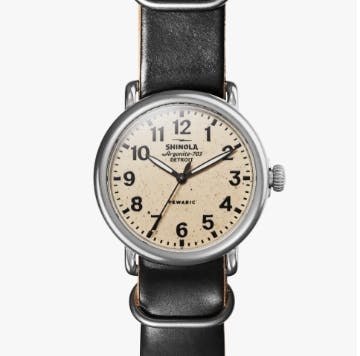 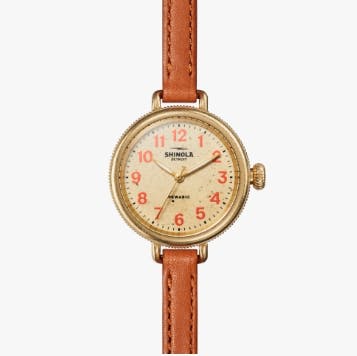 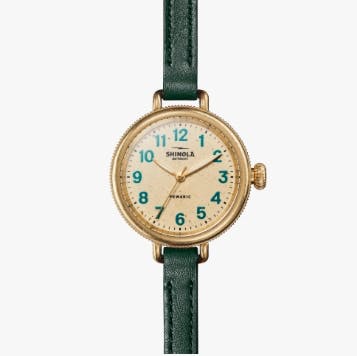