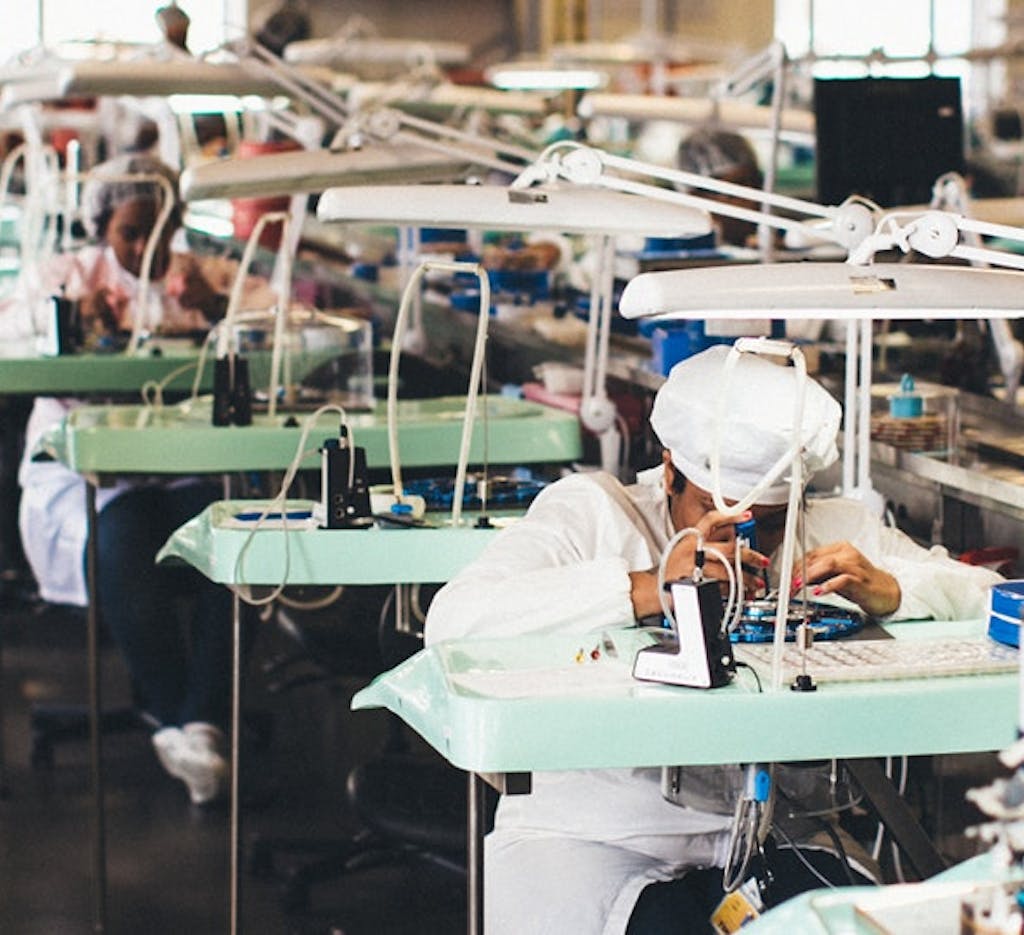 All Shinola watches are built in the U.S. with Swiss and other imported parts.

Elements of the finest quality must come together at precisely the right time, with just the right amount of finesse and care, in order for the 1069 to perform. The same is true for the factory it’s built in.

“When I joined in 2011, Shinola was just an idea,” says Olivier De Boel, Shinola’s watch factory manager. “From inception, the intention was to create world-class manufacturing jobs right here in America,” Olivier says. “It took an entire year of planning to transform 30,000 square feet of raw space within the historic Argonaut building in Detroit into a state-of-the-art watch factory,” he says.

His next challenge was to assemble a team that could help Shinola not only build a movement—but spark one.

Before they had even unpacked the equipment, opportunity came knocking. Willie Holley, a security guard in the building, was intrigued by the rumblings of the new tenants. One day, during his rounds, he curiously knocked on the door.

“Olivier look surprised to see me standing there. I was in uniform and I imagine he thought something was wrong,” Willie says. “I introduced myself and he introduced me to Shinola. By the end of the conversation, I asked for a job.” Just like that, the watch factory team began to take shape.

After just four years—and a visit to Thailand for further training—Willie supervises a team of 36 on the movement assembly line. “I’ve always been big on making something better,” he says. “I studied engineering in school because it’s all about innovation. Shinola is, too,” he says. “I feel like we’re just getting started and I can’t wait to see what we do next.”

Krystal Bibb joined Shinola’s janitorial staff shortly after production began. “I loved getting to work in such a beautiful environment. Right away, it felt different from any other factory I’ve worked in,” Krystal says. “Management goes out of their way to make sure you’re comfortable and connect with you, no matter what your position in the company,” she says.

“But the best part was seeing the movements come together. I would look at all the little pieces while I cleaned and was fascinated by the process. Finally, the team encouraged me to apply for a position in assembly,” she says. “Some went as far as to spend their lunch breaks teaching me how to use the tools so I would feel more confident in taking the dexterity test. I passed!”

“I’d been in working in janitorial since I was 19. While I was excited to learn new things, I was nervous, too,” Krystal says. “Now, after being exposed to several different positions within the factory, I’m a team leader and it’s my job to maintain our rigorous quality standards while encouraging others to try something new, despite their fears.”

When Tom Sabula moved back to his hometown of Detroit, he was surprised to hear there was a company manufacturing watches in the city. He applied for a job on the assembly team and soon he, too, was being taught to master the 1069 by the visiting team of experts from Ronda.

“The facility is a near-clinical environment, so it was an intimidating space to walk into. There was a lot to learn, but that is what made it exciting, too.” Tom says.

“At times the team from Ronda would stand directly behind us—their arms around our arms, their hands around our hands—so we could understand precisely how to manipulate the tiny tools, and feel the subtle, but significant nuances of assembly,” he says. “Now I have the role of keeping that process alive.”

Tom has since been promoted to certified trainer, and he’s developed a simple approach to teaching others how to build our intricate calibers. “I treat people like they’re people, not machines.”

That philosophy seems to be working. The team is now building 16 different calibers and assembling over 600 styles of watches. Before each timepiece leaves our factory, it has to pass Stefan Mihoc’s test. Our Master Watchmaker has been building things that delight the senses since he was a child.

“I grew up in Romania. Back then, my family couldn’t afford to buy toys, so I’d make my own,” Stefan says. “I’d make cars and swords out of wood, pieces of metal and anything else I could find. Other kids who were wealthier and whose parents could afford to buy them new toys would always want to play with mine,” he says. “Sometimes we even traded.”

Watchmaking ran in Stefan’s family and he spent many summers working in his uncle’s repair shop, tinkering with mechanical watches. At age 16, he enrolled in watchmaking school—but his dream was put on hold when he was drafted into the army upon graduating. After immigrating to the United States in 1996 to escape dictatorship, Stefan had a hard time finding work in his field. He eventually got a job as a machinist for an automotive supplier. When he was laid off eight years later, he decided to take a chance, return to his passion and open his own watch repair shop. Shinola came knocking soon after.

“The company has grown so fast, in ways I couldn’t have imagined. We opened a leather factory, we launched audio and eyewear divisions. And we’re getting into the hospitality industry,” Stefan says. “I used to think Tom Kartsotis, our founder, was crazy when he would suggest new ideas but now I don’t. Now I believe.”

“Working here has taught me how to see a new future—for myself also,” Stefan says. “You have to dream real big in order to achieve something big.”

The Argonite 1069 tested us. It required more from us than dexterous hands and careful eyes. It insisted on collaboration. It demanded creativity. It forced everyone outside their comfort zone. And the part we’re most proud of—it has led to the creation of 200 American manufacturing jobs and counting.

Every movement matters in this factory. And with each one we build, we become more and more Shinola.

“The best part about this experience has been seeing the team come together,” Olivier says. “Many of the people that were with us from the very beginning are running their own departments now,” he says. “The skill level is so high, our Swiss partners have said that they would gladly hire anyone on our Detroit team in Switzerland.”