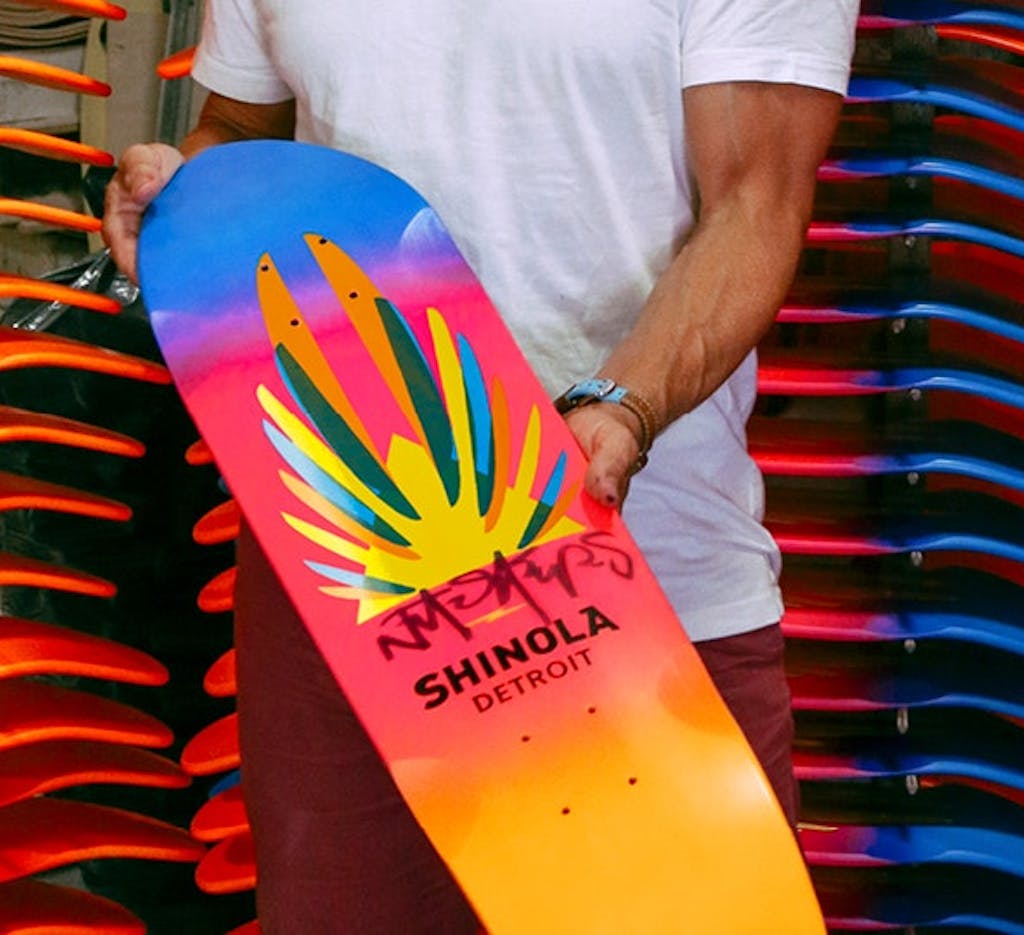 For the second year in a row, we have partnered with this legend to produce a series of 150 limited edition skateboard decks.

These decks were made entirely in Los Angeles by Splitt Lipp using hard rock maple all American wood and a hand silk-screened design. Every board has been signed by Natas Kaupas himself.

Our manufacturing partner, the owner of Splitt Lipp Gene Tibbits, has been making his own skateboards since the 1970s and got into this business in the first place as a poor southern California kid, who was too poor to afford his own new board. “By the age of 12 I had my own company and sold boards to small skate shops in the area,” Gene says. “While these Natas boards are most likely going to be used as pieces of art, each and every deck has been perfectly shaped just like a rideable board.”

Join us September 24 in our Venice store for an exclusive afternoon with skate legend Natas Kaupas. Meet Natas and have your limited edition fade deck signed by the icon himself. Find all event details here. These limited edition boards will only be available starting September 24 in our Venice store, Brooklyn store, and online until supplies last. Shop the product, here.

“With the Venice shop celebrating its second anniversary and the success of the first board, it seemed like a good time to get some celebration color in the mix,” Natas says.

Read the full interview with Natas below.

How did you first get involved with art and what was the first creative project you worked on?

Art was always a part of my life and I never stopped drawing…I was still a teenager when I had my first Pro Model and I think even before that I was just interested in graphics and the kinds of skateboard graphics that are done. Wes Humpston was always a neighbor and a friend super supportive of me making art, he’s the guy who did the original Dogtown graphic. When it came time for me to have a signature model board, he got me thinking in-depth about what it means and what it’s like to have a name and graphic together in skateboard graphics in particular.

I was skateboarding professionally in the late ’80s and because they were using me in the ads I would try to have a lot of influence on them, same with the graphics. I was involved from an early age since they were using my imagery, or photos of me, or graphics with my name on it, so that’s when I really started caring about the whole thing and it evolved from there.

Why did you decide to do this project with Shinola for the second year in a row?

I really like Shinola’s take on modern Americana, it’s not a vintage feel. With the colors, I really wanted to show off the fact that it’s hand silk-screened because it’s pretty rare and it’s just a different feel when you see it in real life. I love being in the woodshop, but the paint and silkscreen process is the best. I love the industrialized graphic application, spray paint, silk screen, stencil, all of it.

This project is personal, I designed it, and I’m shepherding it through the whole production process. I’m excited to maybe have a little West Coast influence on Shinola’s west coast stores.

Do you still skate as much as you used to?

I don’t skate as much as I did back then when it was all I did and everywhere I traveled I skated. I’m almost 50 now and you don’t bounce back like you used to. I’ve been doing a lot of freelance creative direction and design for Birdwell Beach Britches — they’ve been around since ’61 in the U.S.

You’ve led a remarkable career path. Do you have any advice for how to succeed at doing something you love?

A skateboard is such a simple tool. It’s just a plank with some wheels under it and I think there’s a lot of parallels with that in say a pencil. It’s a simple thing too, and you can draw whatever you want, but for a skateboard, it’s sort of the person who needs to find what they’re comfortable doing, and then you can do whatever you want. It’s a really simple thing so the possibilities are endless, just like how with a pencil you can draw whatever you want. Wherever you find your comfort, I think that’s what you should follow. Don’t get too stuck in chasing something that’s not the right thing for you.

The Timekeepers of Detroit