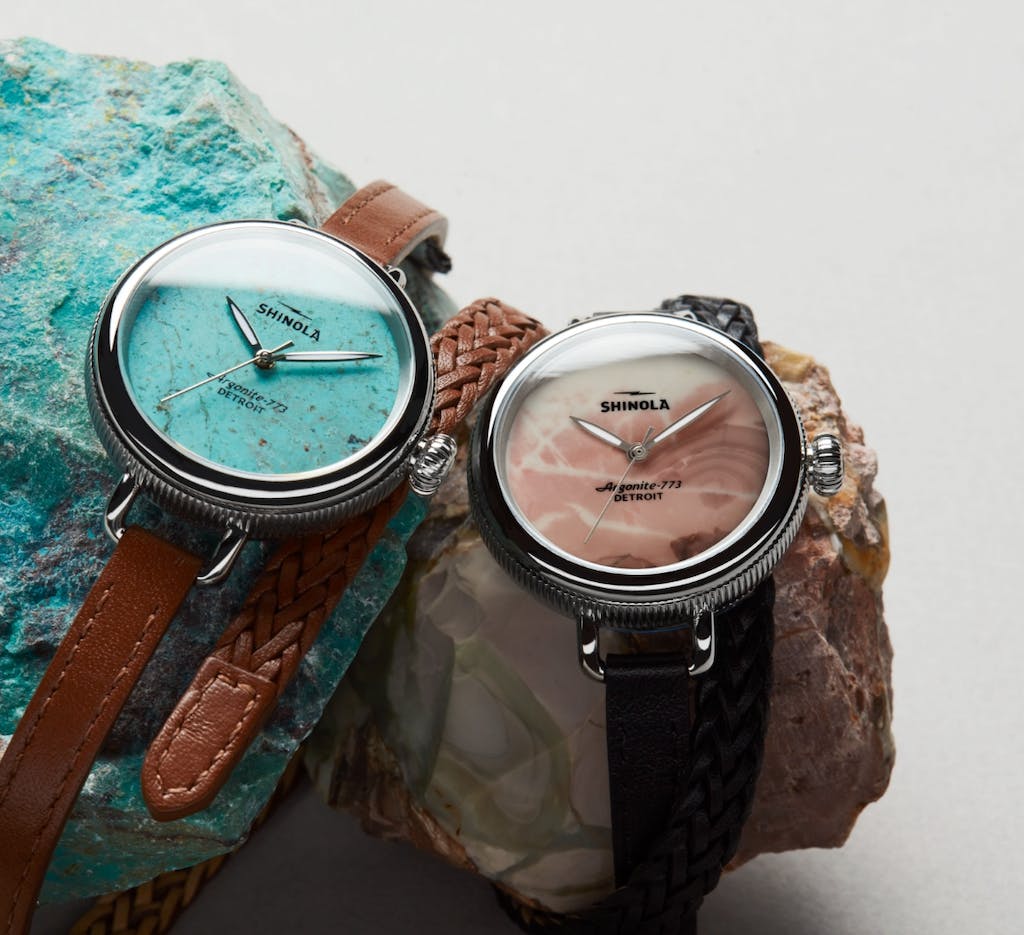 Detroit was on the brink of bankruptcy just as Shinola’s inaugural timepieces were being assembled in a factory nestled in the manufacturing hub’s bustling midtown. The Motor City had long been a favorite target of critics, and its financial troubles in 2013 inspired a fresh round of negative headlines.

Shinola, still in its early days, decided to use its new watch to make a statement about its new home town. In an ad running in the New York Times, the young company proclaimed:

Nearly a decade later, the Birdy remains a mainstay in Shinola’s collection, and Detroit’s comeback story is etched in stone.

Over the years, the Birdy has taken on several personalities, including a silhouette that incorporates an iconic Petoskey into the dial, paying homage to the hidden gems found along northern Michigan beaches. This represented the birth of the Birdy “stone dial.”

This season, Shinola is expanding the stone dial lineup with the introduction of the Willow Creek Jasper and Chrysocolla. Like the Petoskey, these two watches have a natural connection to the Earth and are sustainably sourced.

To understand the two new additions to the family, it’s important to understand the foundation. The Petoskey stone is a collector’s dream—finding even a piece of this fossilized coral on an expansive Lake Michigan beach requires a discerning eye and heavy dose of luck.

When Shinola decided to incorporate Petoskey stones in the Birdy’s design, it also determined to employ an ethical sourcing model. The architects of this approach are Eric Braunwart and Bart Curren, the President/CEO and Cutting Manager at Columbia Gem House (CGH) in Vancouver, Washington. CGH, a family business founded in 1976, are also supplying the stones for the new watches coming this fall.

A COUPLE OF GEMS

Braunwart deepened his commitment to sustainable sourcing after he’d spent a quarter century in the mining industry. In the early 2000’s, he began scrutinizing global supply chains for gem materials and  frequenting rock conferences to discuss the need for transparency.

Driven to do more than just share thoughts in conference rooms, CGH stepped up to tell the stories of these stones by giving credit to the environment and the people behind them. From evaluating wages to creating standards for safe working conditions, CGH laid groundwork for best practices in the gem market, and now operates one of the foremost Fair Trade gem businesses in the world.

CGH has developed a “Mine to Market” philosophy of transparency—they know where their gems come from and where they’ve been—and created GemAmerica™, a program that works with small miners across the United States.

For the Petoskey, CGH connected with a local Michigan miner at the tip of Michigan’s Lower Peninsula. Here, a tract of land sits atop a large, fossilized coral reef from millennia ago. Portions of this reef are mined, then crafted into slabs for our dials.

The process of mining, cutting, and polishing a Petoskey is a delicate challenge. Once living organisms, these fossils have organic shapes. Orienting them for the ideal cut has been perfected by CGH over the years. That same precision and respect for the people and environment involved in the process are now carried over to the Willow Creek Jasper and Chrysocolla.

The name of this revered U.S. jasper comes from a region in Southern Idaho where the stones have been mined for many years, long resulting in some of the world’s most beautiful jasper.

The raw gemstones have a fine grain “porcelain” texture and an assortment of subtle pastel colors, making for a stunningly understated backdrop to the hands of a Birdy timepiece. For Shinola, the stones have been cut to showcase a soothing wave-like pattern, rather than the stripes that are more commonly associated with this type of jasper.

The second stone chosen, Chrysocolla, is a copper mineral found in a large strip of land stretching from Arizona to Northern Mexico. During the copper mining process, miners will often find beautiful blue copper ore known as Chrysocolla. This gem-quality ore is often smelted down into copper, but it can also be saved as gem material.

This ore is high in copper content and when mixed with a variety of natural elements, forms the beautiful greens and blues that harmoniously blend across its ridges. CGH works exclusively with a fellow in Mexico who mines and digs for himself, making Shinola’s Chrysocolla dials even more unique

EVERY STONE TELLS A STORY

Our stone dial Birdys represent both the natural beauty of our land and the inspiring faces that dot it. They embody our sense of place and community, telling a story that’s impressively enduring—like the stones themselves, and our commitments to the places we’re from.

So, the next time someone bashes your city—you know what to do. Just make sure you’re a stone’s throw away. And that your wrist is properly adorned.

These Birdys were made for the job. 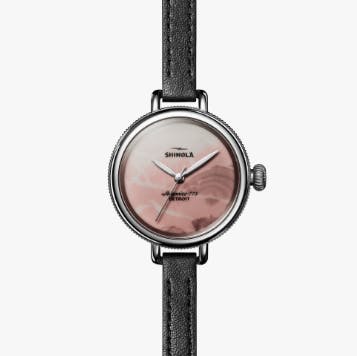 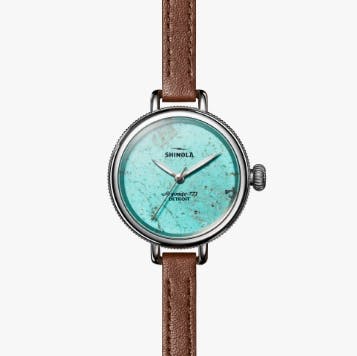 A Marriage of Rugged Innovation and Industrial Beauty

Whodunnit? A Hot Dog in the Birdy Room