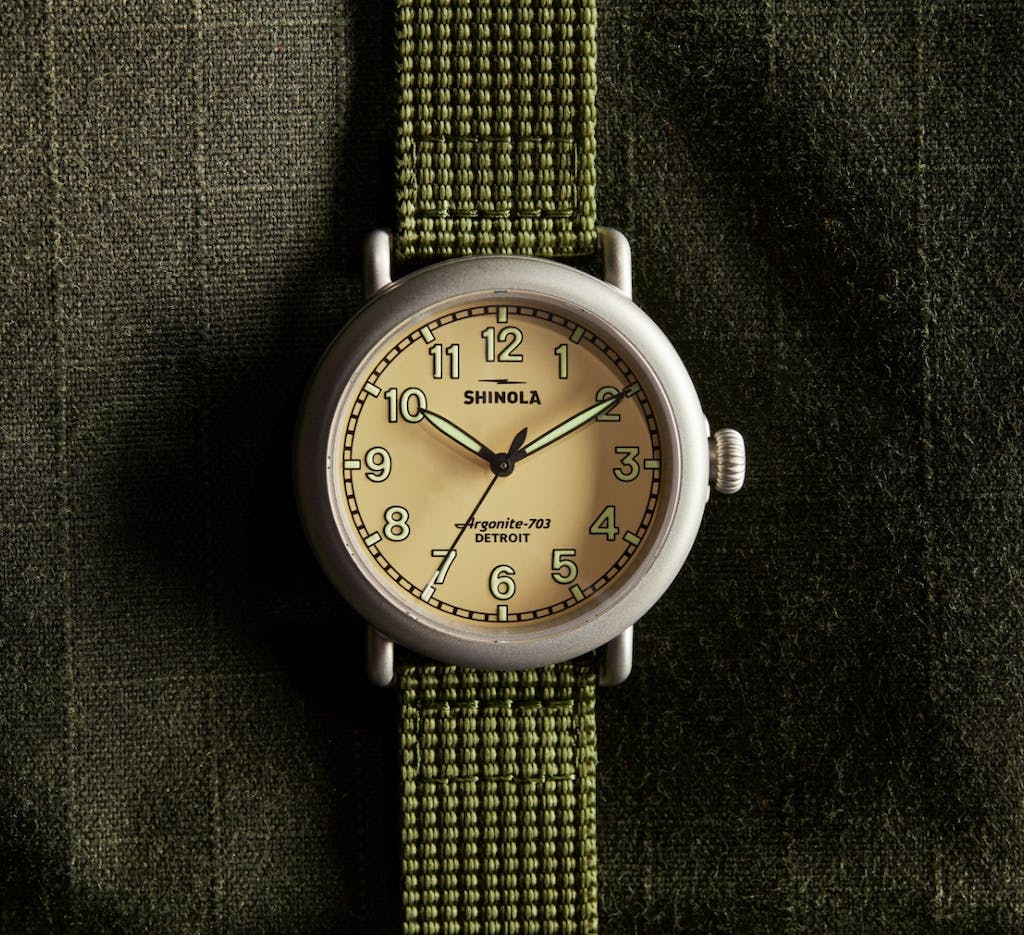 It’s no longer difficult for us to imagine the kind of upheaval that happened during World War II, having just experienced a global pandemic that brought the world to a halt. But that’s all the more reason to take hope from the real stories of courage and innovation shown in those tumultuous times.

Inspired by an unstoppable city and built to honor everyday folks taking on a monumental task, The Shinola Runwell Field Watch was made to celebrate the hand-riveted hope Detroit built when the world needed it most. Now, more than ever, that legacy resonates: When the call comes, be at the ready.

One year before America entered World War II, FDR addressed the country in a December 1940 fireside chat known as “the Arsenal of Democracy,” calling upon citizens to build planes, truck, tanks, and weapons to support Great Britain and the Allied forces against Nazi Germany.

There was no other city that accepted the call quite like Detroit.

By that time, Detroit was the epicenter of manufacturing. The city had perfected the art of churning out automobiles thanks to the Big Three: Chrysler, General Motors, and Ford Motor Company. A can-do spirit was already baked into the DNA of these iconic automakers—a testament to visionary leaders and steadfast workers—so when the moment came, the auto industry was perfectly positioned to accept the challenge, despite never before making what became required of them. A.J. Baime wrote, “Car companies were taking on jobs that they had no experience doing, and hiring workers who had never fabricated a bicycle pedal, let alone a piece of a tank or a machine gun shell.”

But instead of dwelling in the fear of the unknown, there was no time to waste.  The country needed war tools—and the automakers were committed to making it happen.

There were significant manufacturing marvels accomplished by the U.S. during wartime: tanks, amphibious trucks, four-wheel-drive troop transporters, flame-throwing armored cars, and jeeps—but military aircraft production has been hailed as the true gold standard for what our country could do when it mattered the most. Willow Run, the plant created specifically by Ford for the production of B-24 Bombers, could build one per hour by the summer of 1944. It used to take an entire month.

Many smaller manufacturers joined the Big Three, and in the end, 25% of all war materials were made by Detroit companies. Even the Detroit-based radio maker Detrola answered the call, building military radios, electronics, and land mine detectors. The city made such a difference in building the arsenal that many agree WWII couldn’t have been won without it.

POWER OF THE PEOPLE

None of this would have been possible without manpower—and womanpower. The draft took the majority of the male workforce, while the number of people needed for war manufacturing increased. Because of this, those who were once restricted from equal opportunities to well-paying jobs now filled the plants, including Black Americans, Latinx, little people, the disabled community, and women.

The “Rosie the Riveter” icon rose to fame as women from a variety of backgrounds traded in their domestic duties for jobs in the factories, proving that they could do the same work as men. When it came to answering the call and being at the ready, Detroiters rolled up their sleeves regardless of race, creed, or gender.

The enormous manufacturing accomplishments by the home front gave the Allied powers a steep advantage over the Nazis. On May 8th, 1945, the battles in Europe stopped—and after the surrender of Japan several months later, World War II finally came to a close. Detroit had shown the grit it took to overcome even the toughest challenge—not for the first time, and not for the last.

THE ARSENAL OF HEALTH

2020 brought a new fight. Once again, Detroit was at the ready. Manufacturers are making dramatic pivots to produce ventilators, protective equipment, and more in response to the COVID-19 pandemic.

In March, GM and Ford announced plans to begin ventilator production, and Fiat Chrysler pledged to make more than one million masks a month to donate to healthcare workers. Detroit small businesses and manufacturers also jumped into the fray, true to the spirit of the city. Clothing makers sewed masks and protective equipment, and businesses are rallied around essential workers.

To Detroiters, it’s just what you do. To historians and journalists, it’s called “The Arsenal of Health.” Already, leaps and bounds were made in vaccine science and public health measures. As Detroit knows, then the going gets tough, it’s time to break through.

When change and upheaval test the limits of human resilience and ingenuity, we rise to meet the challenge. Innovations that are commonplace to us now were pioneered during WWII. Manufacturing at scale exploded. Assembly lines became more advanced and efficient during wartime production, making the future of the auto industry—and manufacturing in general—possible. Military innovation influenced consumer goods like the SUV. Even the humble timepiece went through a major evolution.

Before WWII, pocket watches were the rule, not the exception. But as officers in the field kept time, they discovered that fumbling with a pocket watch was simply too risky for modern warfare. The solution? Watches strapped to the wrist. WWII (and the ensuing years, when soldiers returned home) popularized the now-ubiquitous wristwatch and caused an uptick in so-called Field Watches. These highly functional watches prioritized accuracy and durability above all else. They had to maintain precision through intense abuse and be legible in all kinds of harsh conditions.

Shinola watch designer Greg V. explains that for field watches, every aspect is about function: “It’s time only, no date. The idea is that the fewer things that can go wrong, the better.” The Shinola Runwell Field Watch is a tribute to these simple watches of WWII—not a precise replication, but a modernized version. Part of the thought process was inspired by the incredible pivots manufacturers made during that time. Greg and the team asked, “What if the government came to us and said, do a military version of what you’re doing for watches?”

The Runwell Field Watch design is the answer: innovation by way of simplification. It’s the next step in the evolution of the signature Runwell—a watch that always finds a way to pay tribute to the city that made it. In this case, to Detroit’s resilience. No matter the challenge faced, Detroit is the city that sets the world in motion. 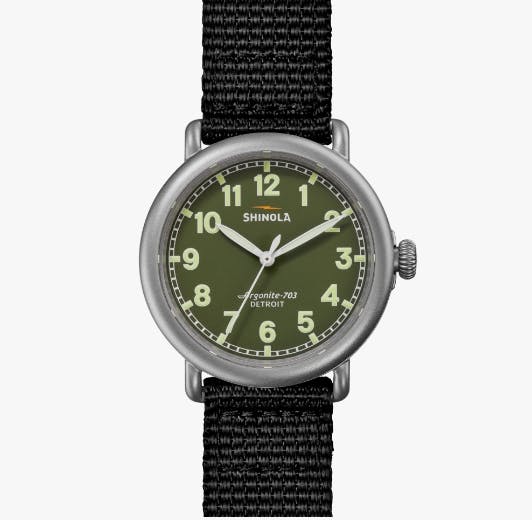 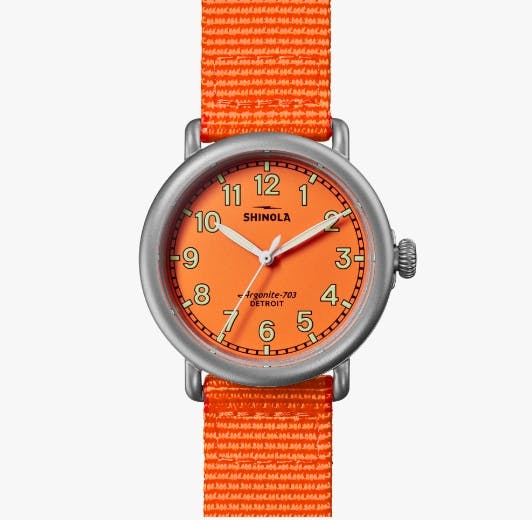