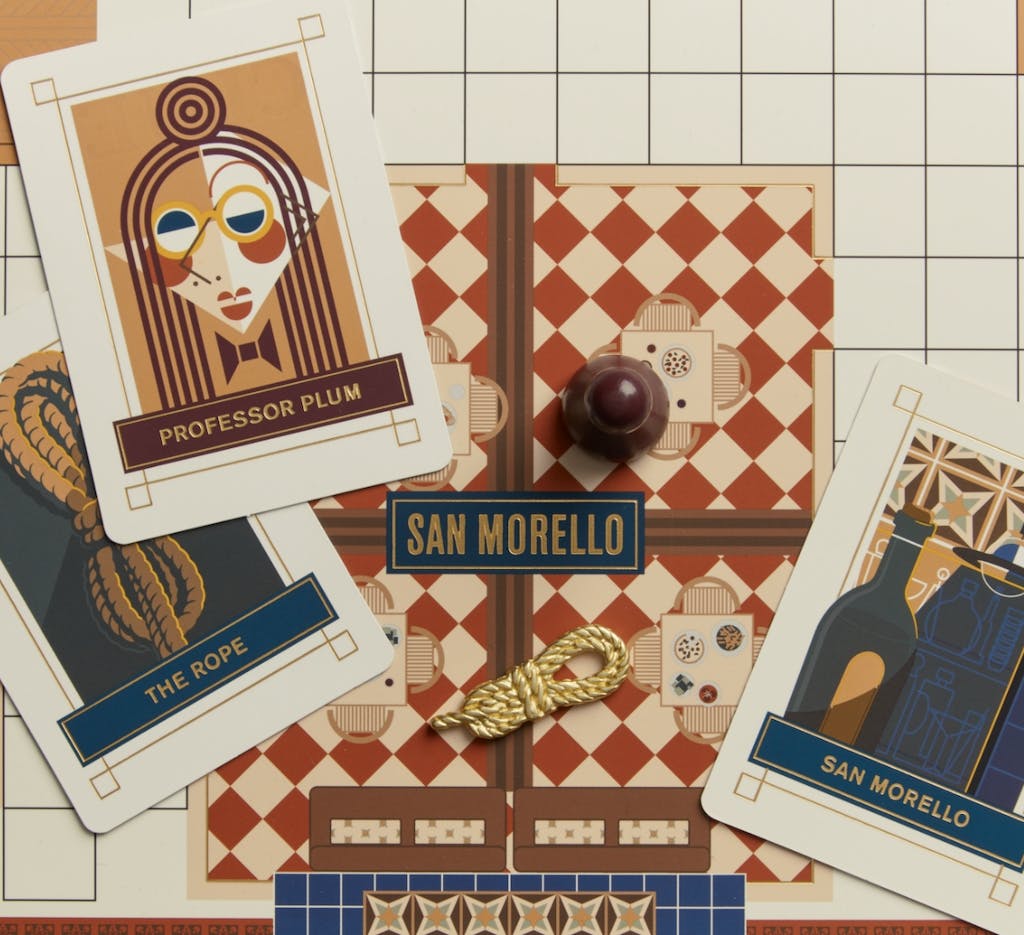 For decades, people have been gathering around tables to play CLUE. Originally invented as a game called Cluedo by Anthony Pratt while locked down at home in England during World War II air raids, the murder-mystery has been as much an excuse to simply be together as it is an occasion to play a serious game.

The same was true as dozens gathered downtown Detroit for a Halloween Costume party at the Shinola Hotel—the setting of a new special edition of CLUE that recently went on sale. These guests had experienced few large gatherings over the prior year-and-a-half, and the soiree represented a festive way to see and be seen even if all were clad in crafty disguises.

The night, like so many Halloweens in the upper Midwest, set a convincing backdrop for a spooky event. Before guests entered the hotel and received their obligatory glass of prosecco, the pitter-patter of their footsteps could be heard along a sidewalk still wet from an afternoon downpour and occasional drizzle. Eerie gray clouds gathered as winds whirled. Silhouettes were reflected off bustling city lights; sounds of revelers could be heard as life returned to something resembling normal.

To get into the door, people dressed in costumes ranging from ghouls to goblins, stood in a line that wrapped well around the corner into Parker’s Alley, a lane of brick storefronts that could be cut directly out of a JK Rowling novel.

Once inside, the intrigue only grew. An army of candles lit the room as Detroit-born Olivia Jean and her band performed to a crowd sipping appropriately themed cocktails and slipped in and out the photo booth. Many of the rooms that partygoers mingled in are fixtures in CLUE: Shinola Hotel Edition.

A HISTORY OF MYSTERY

An edition of CLUE inspired by a popular haunt in Detroit is a fitting evolution. Pratt, the game’s inventor, was a factory worker and budding musician—two characters that can be found in abundance in a place known as both the Motor City and Motown. Pratt’s creation was inspired by the murder mystery games played by some of his clients at private music gigs as well as popular detective fiction, most notably the works of Agatha Christie.

After a successful launch in the U.K., the game made its way stateside by 1949 with a new name: CLUE. The game struck a chord in the postwar United States, and has since become a classic, family-fun activity in households across the country—inspiring films, plays, and murder-mystery events along the way.

The game also inspired Shinola’s in-house design team. In partnership with Hasbro, they reimagined the classic game to mimic the most storied suites and corners of the brand’s namesake hotel, which opened in 2019. There’s San Morello, named after the popular Italian restaurant on the ground floor; The Cass Suite, sharing its name with a well-known corridor in Detroit; and spots that share names with Shinola watches, including the Canfield Suite and Birdy Room.

This latest game follows the success of Shinola’s Detroit-themed Monopoly board, also developed with Hasbro. While the iconic game and toy maker provided manufacturing specifications, nearly every last detail of the keepsake gameboard was designed by Shinola’s in-house creative team.

To get the playing surface correct, Shinola’s creative director, Ruthie Underwood, and senior graphic designer, Madelyn Owens, spent an afternoon taking hundreds of photographs of the details that make the hotel unique, including everything from the checkered floors in San Morello to the boldly colored wallpaper that lines guestroom closets.

Then, Owens replaced the classic rooms on the gameboard with names of suites, ballrooms, and dining options at the Hotel. She even reimagined the character cards by hand illustrating new ones, giving them an art deco-inspired flair.

Zach Fox, a product designer at Shinola, designed the deluxe cabinet in which the gameboard sits atop, staying true to signature Shinola design cues found in the sturdy white oak. Even the woodmovers were meticulously hand painted. Weapons are coated in a stunning matte gold finish.

MADE FOR THIS MOMENT

The CLUE: Shinola Hotel Edition carried its own degree of intrigue. Encouraged to come donned in their finest Halloween attire, guests knew the best-dressed would go home with prizes. The grand-prize winner would secure a free night’s stay at the Hotel; others would take home one of the new CLUE games or a brunch for two at San Morello.

As hundreds of candles space reverberated the rock-n-roll bass of Olivia Jean’s band, guests could be seen looking over their shoulder, eyeing potential contenders for the costume contest. Disguises ranged from Miss Frizzle (the loveable science teacher from the children’s program The Magic Schoolbus) to a shirt that simply read “V-A-R-I-A-N-T” surrounded by small, clipart like illustrations of greenish-yellow “germs.” Killer Housewives and an impersonator of Japanese artist Yayoi Kusama could also be spotted.

Just like it has since its conception during WWII, CLUE has a profound ability to subvert the cultural uncertainty of the moment by channeling universal anxiety into a game that brings people together to create joy and entertainment. The Shinola Hotel party – taking place amid continued concern and caution related to the pandemic, is a testament to this legacy. So is Shinola’s commitment to making things that are unapologetically built to last.

For many guests milling about the hotel’s Birdy Room—a beautiful, all-glass atrium that’s become a favorite wedding venue amongst metro Detroiters—the night represented a return to normalcy mixed with a dose of nostalgia. Many had pulled out and dusted off their childhood copy while looking for fun and escapism at home amidst the ongoing COVID-19 pandemic.

And as far as the costume contest? A hot dog won the big prize. 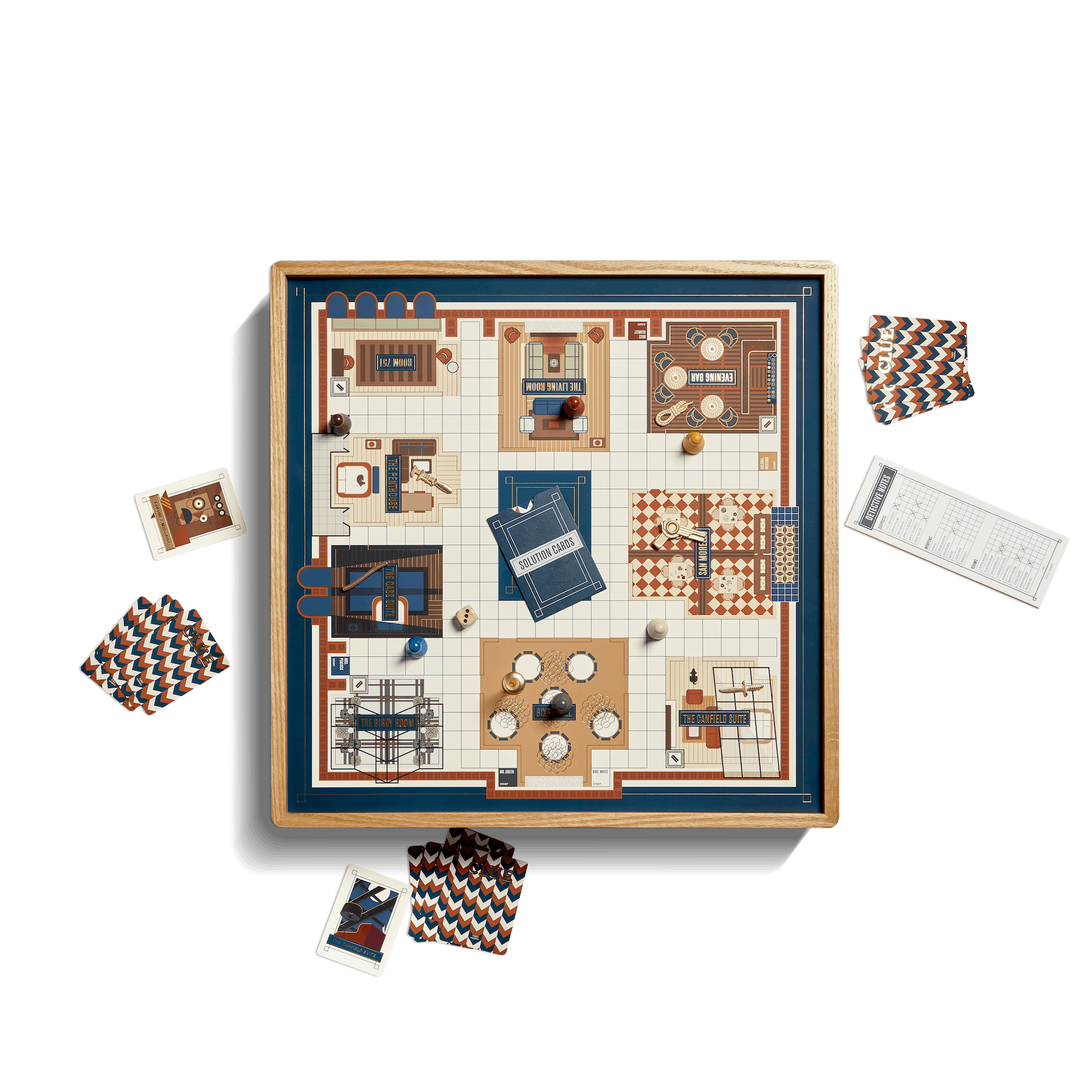